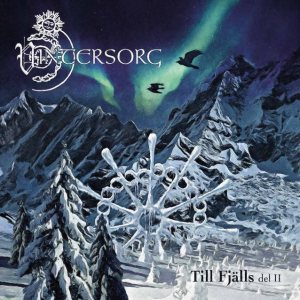 For those who don’t know, Vintersorg is both a band and the alias of band leader Andreas Hedlund. Hedlund is also a member of Borknagar (one of my favorite bands) and Cronian (with Øystein Brun of Borknagar) among many other projects. Hedlund has a very distinct clean AND harsh vocal which makes him one of my favorites. The band Vintersorg also features Mattias Marklund on guitars, plus new addition Simon Lundström on bass. Everything else is performed by Hedlund.

The last few Vintersorg albums have been incredible and epic as fuck. Both Orkan and Naturbål are massive slabs of extreme metal infused with folk metal and black metal. So now what does the band do? They write a sequel to their 1998 full length debut “Till Fjälls.” It’s an interesting move and one that makes sense if the band were going for the more stripped down sound of that record.

But times have changed in the last 19 years since that album. The band are stronger, Hedlund’s vocals are definitely stronger. So while “Till Fjälls del II” is a sequel in name, the overall vibe and style feel more in line with what the band has done over the last 7 years or so versus an album from their formative years. In some ways, this album sounds like what the first album COULD have sounded like if done by a mature band. There’s nothing wrong with any of that either.

“Till Fjälls del II” is a long album and has a LOT going on. The arrangements are complex, the instrumentation is very detailed also. And while I still don’t understand the lyrics, I don’t need to. This is a very cinematic album. I feel that I am returning “to the mountains” but the landscape has changed drastically in 19 years. It’s less volatile yet still challenging. There’s a chill to it which comes courtesy of the more folk instrumentation used on the album.

While the press releases claim there is no “progressive trickery,” I find this album to be as progressive as anything Vintersorg (the band or the man) has ever done. It is very epic and you can feel the mystic nature surrounding you as you listen to “Till Fjälls del II.” Rather than a sequel, this is the next chapter of a book. “Till Fjälls del II” is not a return to the band’s roots because they never left anything behind. This is evolution.