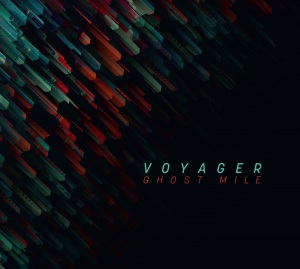 I love Voyager and it goes beyond just them being a great band. Their music helped me through a very difficult time in my life so I have a very special place for them in my heart. After their last album “V” blew me away, I was VERY excited to hear “Ghost Mile” which I pre-ordered without hesitation.

I heard the song “Misery is Only Company” when they released it and I assumed it was just a left over track from “V” which was clearly not good enough for the album. If they were going to use it on the next album, I assumed it would get revamped or just stuck on the end of it as a bonus track. This is where things go off the rails for me. That song is the same as it was and it is the second track on “Ghost Mile.”

To say I am disappointed with “Ghost Mile” is probably an understatement. Sure my expectations are REALLY high but given that each of the last two Voyager albums were masterpieces, I didn’t think the band would run into a brick wall. The riffs are awkward, the hooks are few and overall this album is confusing as hell. The first two songs need to grab the listener and one I already mentioned doesn’t. The first song “Ascension” never takes off and really goes nowhere.

So what does work? There are bits and pieces of things that should have been developed more. The chorus on “Lifetime” is great but gets lost amongst the debris of the rest of the song. The title track has some great riffing but it tends to stick with one riff rather than flow to some additional great riffs. The weird 80s key sounds on that track don’t exactly help matters.

It’s really hard to figure what happened. To put it into perspective, none of these songs are better than ANY of the songs on the last two albums. It’s also telling that “Ghost Mile” is significantly shorter in length than “V.” “V” sounded effortless. The songs just flow and take you for a ride. The songs on this album feel very labored. It’s actually hard for me to get through the album which for me and a Voyager album is unheard of!

I still love Voyager and that will never change. Perhaps others love this album and I’d love to know how! HAHA! “Ghost Mile” sounds like a band that should have perhaps delayed the album to work out the riffs and overall kinks. I suppose even the best are capable of a misstep. For now, I’ll wait for the next album and perhaps revisit “Ghost Mile” down the road.

1. Ascension
2. Misery Is Only Company
3. Lifeline
4. Fragile Serene
5. To The Riverside
6. Ghost Mile
7. What A Wonderful Day
8. Disconnected
9. This Gentle Earth
10. As The City Takes The Night