Posted on July 19, 2017 by thenihilistchamber 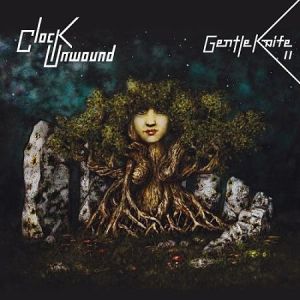 I always find it refreshing listening to a band that aims to sound different on every track, and I usually applaud artists willing to take this risk even if the results don’t always pan out. Gentle Knife takes this varied approach on “The Clock Unwound”, and racks up a trove of hits along with the misses, leading to a record that is a bit uneven but that I ultimately enjoyed.

When spinning Gentle Knife’s “The Clock Unwound”, I took note of the stylistic shifts on display, and I definitely appreciated them. Opener “Fade Away” sets the stage with some solid Big Big Train neo-prog bombast before shifting into an unexpected mid track Crimson flavored heavy-prog section that almost elicited a banging of the head from this reviewer. As someone unfamiliar with the band, I truly didn’t expect this after how the song began, and I was pleasantly surprised as the instrumental section developed.

Next, “Plans Askew” begins in similarly pastoral fashion before a huge sounding melodic solo section and closing vocal melody, as flutes flutter on over the proceedings. “Prelude Incipit” functions as an atmospheric piano-centric piece built around a haunting and vibe-y horn theme. So far so good, and the sound of the record has established itself as relatively mellow and melodic prog with some dense instrumentation and occasional flashes of heaviness.

For as much as I enjoyed what came before and what was to come after, “Resignation” just largely didn’t work for me. Although the flute intro and initial instance of noir-esque spoken vocals was pretty effective, the song is a little too long and meandering for my taste and seemed to drag a bit. The build towards the instrumental break in the middle is mostly effective, but it then ultimately settles back into the same progression that began the song, and nothing apart from the spoken part really grabs the listener’s attention.

The remaining two tracks end the record on a high note however, as “Smother” and “The Clock Unwound” both recapture and expand on the rock inflection of the earlier part of the record. “Smother” especially is a ton of fun. The synth line is infectious, as are the vocal melodies, conjuring an 80’s arena rock meets prog-pop vibe that had me wishing for a bit more of this sound. The hooks on this track really grab deep, and I would probably go as far as to say it was my favorite track of the record.

“The Clock Unwound” similarly explores an unsettling atmosphere and some dense, angular, and heavy guitar riffs and harmonies. The song takes a little while getting to where it wants to go, but that seems like a trait of Gentle Knife on the whole, which isn’t necessarily a bad thing as long as the time from point A to point B is filled with interesting visuals. For the most part it is.

One final note would be in regards to the mix and overall production, which is uniformly fantastic, especially in regards to the drum tone. Regardless of the assessment of the songs and what did or didn’t work, the record sounds spectacular and the band and engineers should be proud. Overall a record to check out for those who like their prog traditional but with a bit of experimentation, and some well thought out instrumentation to boot.