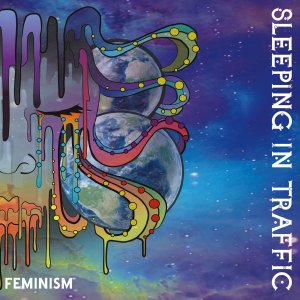 Despite their name, Sleeping in Traffic sound nothing like Beardfish. Rather this Edmonton, Alberta band sound more like their fellow countrymen Protest the Hero, albeit with a sax in the mix of things. Their overall style is the same careening prog metal that PtH are good at. This is Sleeping in Traffic’s debut album and it’s called “Feminism.” I have no idea.

The album starts with “Just an Echo” which, while fairly catchy, points out my issue with the album: the vocals. They are a bit husky and tend to do things (who says “bop bop” anymore?) that I find annoying. The music is good though. This pattern continues with “Forming Alliances” which is a bit less frenetic and has a cool jazzy section. Again, the vocals just don’t work for me. They are in tune, it’s just the tone that doesn’t work for me.

“Reactivist” is another track with a fast riff, similar to “Just an Echo.” “Not Your Fault” is an odd sounding track musically that I like…but yeah at the risk of sounding like a broken record, you can guess my issue. I really enjoy the synth on the closing track “Listen Up!” which points out that Sleeping in Traffic have promise and ability. It’s just more “here and there” than all worked out.

For a debut album, I am impressed with “Feminism.” However, it falls into the bucket of bands that just don’t quite cut it for me. I think Sleeping in Traffic have potential, so they are worth following. The question is can they develop their style more and maybe tighten up the vocal area?

Tracklist:
1. Just An Echo
2. Forming Alliances
3. Reactivist
4. Injustice System
5. Not Your Fault
6. Destroy to Rebuild
7. Teach the Young
8. Complacency, Our Foe
9. Listen Up!

1 Response to Sleeping in Traffic – “Feminism”