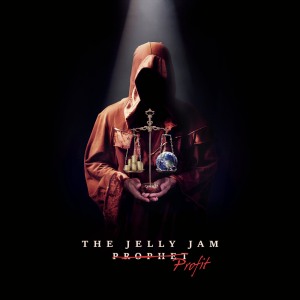 The Jelly Jam are made up of some of my favorite musicians. I love Dream Theater, King’s X and the Dixie Dregs. And yes even Winger! This is the fourth album together for Ty Tabor, John Myung and Rod Morgenstein as The Jelly Jam. They did 2 albums with keyboardist Derek Sherinian as Platypus. So they obviously like playing together and on “Profit,” I think it all finally gels.

“Profit” is a concept album about a prophet who tries to save the world, etc etc. More importantly, the band find a sound and groove that REALLY works. This is not about how many notes they can play. It’s never been about that. These are well constructed songs with good riffs. “Care” sound like the classic riff based track that the band have done before so it makes for a good intro to the album as a whole.

“Stain on the Sun” has a breezy vibe to it which is a better representation of the album as a whole. It’s probably their mellowest album overall but I found that to be quite refreshing. The band seem to just be playing whatever comes out versus trying to force it, something that I felt was the case with the first 2 albums they did years ago.

Granted Tabor still loves his rhyming couplets which can be a little on the obvious side but since he writes a good melody, I can overlook lyrics that are too rhymy. The song “Water” has some really iffy lyrics though. Water and daughter do rhyme but they don’t make for a good lyric. It’s my least favorite track on the album and doesn’t work. “How long will we dance with the hand of the Devil’s daughter?” Ugh.

As for my favorite tracks, they actually happen later in the album. “Profit” is one of those albums that actually gets stronger as it goes. “Ghost Town” has some awesome percussion from Morgenstein which just adds to the cool groove of the song. “Heaven” is REALLY nice, LOVE the melody on this one. It has some beautiful guitar work from Tabor. Also, Myung lays down some really nice bass work which transitions well into “Permanent Hold” which is like an outro for “Heaven.” Some of the band’s best work right here.

“Fallen” is another favorite track. Again, it is mellow but so well written. That’s really the overall vibe as I’ve said and the band make it work. “Profit” is a cool, late-in-the-evening album that you can really chill out to and enjoy. It shows that these 3 talented men are more in tune with each other than ever.

I have been a fan of progressive metal and progressive rock for most of my life. My music collection is insanely large. My passion for life is music...progressive music!
View all posts by Rob →
This entry was posted in art rock, melodic rock, progressive rock and tagged music review. Bookmark the permalink.

1 Response to The Jelly Jam – “Profit”