The Pineapple Thief – “Versions of the Truth” 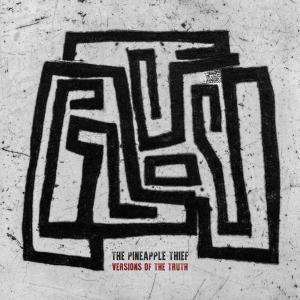 Let’s get this out of the way. Having been a fan of Bruce Soord and the Pineapple Thief since 2002 or prior, I’ve yet to not love every album released. The new album “Versions of the Truth” is no exception. TPT is so reliable as a band that I can pre-order an album such as this one without having heard a note and know I will enjoy it. The question is just how much will I enjoy it.

Where does “Versions of the Truth” stack with the other albums, especially the last 2 that have had Gavin Harrison on them? I really like “Your Wilderness” but I LOVE “Dissolution.” It was a bit more varied and wasn’t afraid to get in your face as needed. “Versions of the Truth” is somewhere between those albums for me. In fact, it feels like a combination of them.

“Your Wilderness” had a mellowness, a subtlety to it…sometimes to a fault. “Versions of the Truth” does bring that back more into the sound. The title track is a prime example. It glides and doesn’t pound. Harrison is able to add more to a highhat than any drummer I know of. Ok there aren’t those massive fills but he finds a way to inject life into a song.

The songs on “Versions of the Truth” remind me a bit of classic TPT as well. Many are more direct and to the point with only “Our Mire” being somewhat “sprawling” at 7 and 1/2 minutes. So this album is definitely about the songs, and the topics of the lyrics. I won’t go into too much detail about the lyrics since I think listeners should have a chance to interpret as they wish. However, the title track addresses when opinions are more important than actual facts. People prefer a point of view they agree with to any sort of facts that don’t support said view. So is there one truth? “It’s not how I remember it.”

On “Break it All,” Soord asks “What version of yourself have you been listening to?” I love the riff on this track, it has some pop to it which underscores the venom in the subject matter. “Demons” was the first of the 4 singles released from the album thus far. Musically, it’s a bit funky and has an awesome groove. It’s songs like this that show the depth that this band (and Bruce Soord) have always possessed. “Driving Like Maniacs” would fit in well on “Your Wilderness.” This is the more mellow side of the band.

“Leave Me Be” is an acoustic based track which, though a mellow, does have some moments of power and the guitar solo is very cool. I mentioned “Our Mire” because it was the longest track and since this is a “prog” site, I figure people are curious about that sort of thing. The song isn’t about noodling since that’s not what TPT does. Rather this song has great playing and awesome dynamics. This is definitely my favorite track on the album and ranks with anything the band has done.

Yes, the album does have more space in it. Meaning, there aren’t too many instruments or layers to clutter things up. Stripped back a bit maybe? “Stop Making Sense” is a good example. You can hear each instrument and how they interact with each other. Plus I love vibes. Who doesn’t? I do wish the band would have cut loose a bit more but again, TPT don’t follow a pattern. This is not the same as their last album yet it “Versions of Truth” has plenty of the band’s DNA all over each track that you know who it is. That’s what I love about bands that I find to be special. YOU KNOW WHO IT IS! This is the Pineapple Thief and “Versions of Truth” is a great album by them.

I have been a fan of progressive metal and progressive rock for most of my life. My music collection is insanely large. My passion for life is music...progressive music!
View all posts by Rob →
This entry was posted in art rock, progressive rock and tagged music review. Bookmark the permalink.

4 Responses to The Pineapple Thief – “Versions of the Truth”