Posted on September 2, 2019 by restlessamoeba 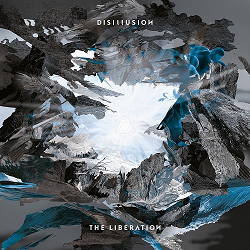 And here we are with yet ANOTHER band that I wasn’t familiar with but seems to have been around for years… their first demo was in 1995! But their first studio album wasn’t until 2004, when they released Back to Times of Splendor. After listening to this latest one, I kept hearing that the albums by this band seemed to differ somewhat. So, I went back and listened to the first two. The first one was a more prog melodic death metal affair and a pretty solid album. The second one, Gloria, went in a more industrial route and kind of didn’t feel like the same band. While I do like that second album, I didn’t like it as much as the first. So where does that leave us? Here we are, 13 years later and a new album has finally arrived.

Since their beginning, the band has gone through many line up changes, but always with Andy Schmidt as the core. From Wikipedia regarding this album: Andy apparently “isolated himself to a small cabin in the woods somewhere in the Czech Republic for 3 weeks to work undisturbed on new songs” using money they raised from their Patreon service they setup. The album creation process got delayed a bit and the line up changed during this time as well. Now with the band, along with Andy, are Sebastian Hupfer and Ben Haugg on guitar, Felix Tilemann on bass and Josh Saldanha on drums.

So how does this new album fare? Man… that cabin in the woods process paid off!

You know how you follow a band for years, and then it takes them a long time to come out with a new album but it turns out to be a huge letdown? All that anticipation just built up and all your expectations shattered? (And no, I am NOT referring to TOOL here). Well… I can tell you, that if I had known and followed this band from the beginning… and waited 13 years for this one… I would have been in sheer ecstasy with The Liberation. As it is, coming in new to the band, I am blown away by this. It is a masterpiece to me. One song in particular, has so highly resonated with me that it has edged itself up to Song of the Year territory. This album is that good. If I had to describe them, as heard on this album, using other bands as comparisons, I would say they sound like a cross between Opeth (both eras), Insomnium, and even some Green Carnation and a touch of Pink Floyd… and hell… throw in some Tom Waits too.

The album consists of 7 tracks, 3 of which are in the epic-ish range of 12 minutes or so. And the lyrics are so beautiful and so poetic that I just feel the need to pull a small quote from each song. Not something I normally do.

a lightless beacon in a cutting storm”

In Waking Hours is a shorter intro to the album that eases us into things with some calming guitar and orchestration before ripping into the metal of Wintertide (see the video below). This is a good lead off track for the album, and the first “epic” that encapsulates everything the band are about. Metal that sounds like you are standing out in a frozen tundra, gravelly spoken words that lead into harsh vocals and great harmonies. You can just feel the epicness in this track. They even throw in some vocal layering of a few lines representing the chaotic nature of that portion of the song before settling back into calmness for a bit. The guitar on this track, and the album as a whole, is just gorgeous.

“I’m staring at the firmament

from mires of regrets”

The Great Unknown starts off as more of a death metal onslaught but has a beautiful chorus and then turns into a bit of a light Opeth/Pink Floyd-ish sound for a while… again, with beautiful guitar work.

“My hands are cold, my soul it feeds

on failure and catastrophe”

A Shimmer in the Darkest Sea delivers us one of the most melancholy choruses on this album and I do love me some melancholy. Another winner of a track.

“beneath the calm, beyond facades

in whispers and with seagull tongue

a tale is being sung”

The Liberation, the song,  has tons of rage and harsh vocals and some fantastic orchestration. Probably the track with the most growls per minute. 😁 But still with the great harmonies in the choruses. We also get another nice Opeth/Pink Floyd like interlude that then builds into an epic conclusion and is the perfect lead in to the next track…

you stare across the sea

Time to Let Go is the song I alluded to at the beginning that has easily shot into my top 5 songs of the year. So poetic and so melodic. This song is just perfect to me. The Pink Floyd-ishness comes through a lot to me in the verses here. And some freaking beautiful guitar work in the short interlude before ripping back into the chorus. I. Cannot. Stop. Listening. To. This. Song. I can’t tell if it is genius or not holding this back from being the first single. But it is definitely my favorite of the stellar bunch.

tonight we are in deepest craving

tonight, we light the empyrean”

The last epic of the album is The Mountain. It seems a story of two companions traveling through the mountains that have to depart one another. I honestly cannot tell if one is dead or not. But either way, the lyrics are so powerful and helps the song go through it’s many moods for this tale. The orchestration is lush and gorgeous and the ever present wind blowing just tops off the imagery so beautifully. It all paints the picture of this hellish wintry mountain landscape so well and makes me feel like I am there.

So… do I like it? Let’s just say I haven’t hit the pre-order button so fast yet this year. I cannot say enough good things about this album. If you like any of the bands I reference above (except Pink Floyd. I don’t think many PF fans would go for the harsh vocals), check it out!

1 Response to Disillusion – The Liberation