Billy Sherwood – “Citizen: In The Next Life” 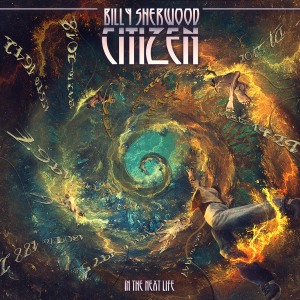 Billy Sherwood returns with his follow up to 2015’s “Citizen” with a sequel called “Citizen: In The Next Life.” Sherwood is a busy guy as he plays in versions of Yes and Asia, trying to fill the shoes of legends. While he does still have a vocal style similar to the late Chris Squire, on “Citizen: In The Next Life” it seems that his voice is beginning to show some wear and tear.

The vocals are rather raspy and thin at times which doesn’t help an album that (like all of his material) rely heavily on melody. Sherwood has a style musically. The songs are slower and not terribly technical. That’s fine so long as the songs are good. I did like the ones on “Citizen,” but I think “Citizen: In The Next Life” is more of the same…but without the uniqueness.

Sherwood is going over the same ground. The concept is still about a time traveler (The Citizen) who meets people and places through out history. Unfortunately, this one sounds like outtakes from the first album. “The Partisan” is about Hitler, while “Monet,” “Via Hawking,” and “Mata Hari” are about their namesakes. But it’s hard to distinguish one from the next after a while. Mid to slow tempo, thin vocals and average playing. Soft and mellow. And the songs just aren’t unique.

To be fair, Sherwood has made a career out of that style. It’s just that he did it better within World Trade, Conspiracy and Circa:. Perhaps, he needs a band to keep him from settling into this sort of bland material? I’m not sure. Or perhaps he is just worn out? Who knows. “Citizen: In The Next Life” isn’t going to get him any new fans and it might not even interest the ones Sherwood has.

I have been a fan of progressive metal and progressive rock for most of my life. My music collection is insanely large. My passion for life is music...progressive music!
View all posts by Rob →
This entry was posted in art rock, progressive rock and tagged music review. Bookmark the permalink.