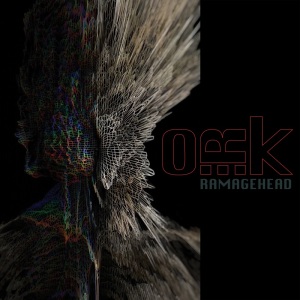 Is it possible for me, as a huge fan of P@ Mastelotto, to give an objective review? Probably not but I’m going to do it anyway.

Consisting of band members Lef: vocals, keys (Obake, Berserk!), Carmelo Pipitone: guitars (Marta Sui Tubi), Colin Edwin: bass (Porcupine Tree) and Pat Mastelotto: drums (King Crimson), the band has released it’s third album “Ramagehead”. In my head, the two previous efforts “Inflamed Rides” and “Soul of An Octopus” were fantastic. I found myself wondering if they could do a decent follow up. You know, the infamous 3rd album that draws the most criticism, that can make or break a band? So now I’m listening and song one is playing… Not overly impressive. “Kneel To Nothing” seems a bit “Seattle-Grungy” to me but still decent. A nod to Soundgarden perhaps? Let’s continue…

“Signals Erased” has a great proggy intro. This one has me engaged. The guitar work is Frippy in a Discipline meets Thrak sort of way and then creeps into a heavy rhythm. I think we’ve got something here. Actually I would expect nothing but brilliance from these stellar musicians and here we have it. “Beyond Sight” is a beautiful tune reminiscent of a very cool David Sylvian song. “Black Blooms” is a highlight for me on this album. Haunting piano mixed with Serj Tankian’s (System Of A Down) fantastic vocals are enough to make me want to buy this album. The build up on this song is monstrous!

“Time Corroded” and “Down the Road” are simply angelic. The acoustic guitar work on this album is amazing. Despite a questionable intro song, this is exactly what I would expect from O.R.k. I’m heavily into moody and slightly dark music and O.R.k ‘ORkhestrates’ this very well. So now we have a two part song “Some Other Rainbow” with the jazzy/fusion rock “Strangled Words’ sandwiched in between them. The ending stretch reverberates another Sylvian-esque vibe.

I had to give the opening track “Kneel to Nothing” another listen. In the context of the album as a whole I can see where this tune would fit on the record although I wouldn’t open with it. I feel like they should have first established the feel of the album before venturing off into Chris Cornell land. Maybe it’s just me.

All in all, the album is well worth a purchase. Progressive energy with acoustic psychedelia and some intense ambient electronica makes me give this album a 9/10. But of course, P@ can do no wrong in my book.