The Eternal – “Waiting for the Endless Dawn” 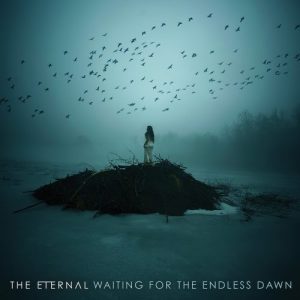 “Waiting for the Endless Dawn” is the sixth album by The Eternal and the first one that I’ve heard by the Aussies. They play a heavily prog influenced brand of doom metal. I’d compare them with bands like Katatonia, While Heaven Wept, Pallbearer, My Dying Bride (for obvious reasons) and even Swallow the Sun. Vocally, Mark Kelson reminds me a bit of countryman Tim Charles of Ne Obliviscaris.

A big part of the sound is the keyboards of Martin Powell who has been in many bands including My Dying Bride and Cradle of Filth in addition to touring with Anathema years ago. He adds both melody and texture to the songs, a brightness and darkness at the same time. The album kicks off with the massive “The Wound,” which is nothing short of awesome. Whether it’s the main riff or the incredible soloing toward the end of the 20 minute track, this one has everything. Literally. Did I mention the strings?

“Rise from Agony” is a mere 11 minutes and if you slowed it down even more, you’d have a My Dying Bride track. You’re asking what makes them prog? It’s the approach and technicality. Much as I just said, if you slowed them down more they would be pure doom. If you sped them up, they would be total prog metal. “Rise from Agony” walks that line, it should be depressing yet it has a glowing power to it.

“A Cold Day to Face My Failure” is one that misses the mark for me a bit. The vocals sound a bit weak for some reason and even the main riff is missing the punch that is present on the first two tracks. “I Lie in Wait” has a better riff but the distorted vocals are a bit off putting for me. I really like the atmosphere on “Don’t Believe Anymore.” It’s like a doom ballad. Is that possible? Apparently so.

“In The Lilac Dusk” features Mikko Kotamäki of Swallow The Sun on vocals so it’s hard not to compare the song to that band. I have no problem with that since Swallow the Sun are a favorite of mine. The song is easily one of my favorites on the album too. The title track closes the album and is the shortest track on it! It’s an interesting way to close out the album. Rather than close with an epic, the album STARTS with it. I might have flipped the two.

“Waiting for the Endless Dawn” is worth it for “The Wound” alone. That track is absolutely incredible. At 20 minutes, it does add up to a large portion of the album. For the most part, the album is really good and if you like any of the bands I mentioned, I think you’ll enjoy this. I guess I need to check the back catalog for The Eternal since I do enjoy all of those bands.

Tracklist:
1. The Wound
2. Rise From Agony
3. A Cold Day To Face My Failure
4. I Lie In Wait
5. Don’t Believe Anymore
6. In The Lilac Dusk
7. Waiting For The Endless Dawn