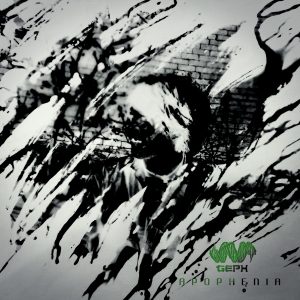 What do you get when you add two Chapman stick players and a drummer? You might think Stick Men but no, the correct answer is GEPH. GEPH are from Massachusetts and are clearly influenced by Tony Levin and the bands that he has been a part of. It’s hard to avoid that comparison when Levin basically put the Chapman stick on the map. Plus GEPH are a progressive rock band with a bit of jazz and metal thrown in.

The sounds that their stick players are able to get out of that instrument are quite interesting and diverse. My initial concern was that this would be a very bottom heavy sounding album. While I know the stick is capable of sounds that a standard bass really doesn’t have, Josh Goldberg and John Tyler Kent use the instrument to its full capabilities. And the two of them can definitely play. Drummer Josh Merhar is no slouch either!

Rather than being any sort of an Lvein-era Crimson clone (because they aren’t), the band have elements of modern prog instrumental bands too. Think of Animals as Leaders ditching the djent and drop tuning way down. There’s that level of virtuosity on “Apophenia.” The opening track “Macroaggressions” definitely highlights not only the thick bottom end that a band like this can provide but even some parts that you’d swear were on a guitar.

“Whole Body Headbang” does get into some headbanging but not before some very rubbery stickwork. The distortion used does make the sticks sound like regular guitars…unless they somehow are! “Get Your Insignificance On” showcases their jazzier Holdsworthian side which is rather tasty. This is not to say that there aren’t moments that don’t work for me. While I like heavy music, “WWFD” sounds a bit off for some reason to me. Perhaps, it does need guitars?

Overall, I found GEPH’s “Apophenia” to be enjoyable and very easy to listen to. I do think some songs could use bigger hooks because when you are doing instrumental music, you don’t have the benefit of a typical chorus to pull the listener in. There is not denying GEPH’s talent, but playing is just part of what it takes. Solid effort though and one that will please fans of a good groove and plenty of bottom end!