Winterfylleth – “The Hallowing Of Heirdom” 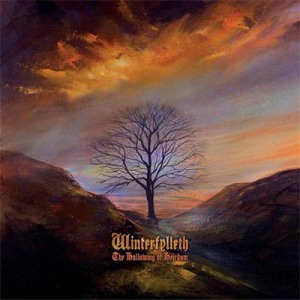 Winterfylleth are one of my favorite atmospheric black metal bands. Their approach to their music and their concepts are all quite progressive. Their new album “The Hallowing Of Heirdom” shows that the band are willing to explore the more mellow, acoustic folk side of their music.

In many ways, it reminds me of when Opeth released “Damnation.” While many people at the time called it a “departure,” the music on the album was based around one side of Opeth’s music. “The Hallowing Of Heirdom” is the same way for Winterfylleth. The tracks are acoustic and the percussion is minimal. The vocals are all clean. And this is something the band has incorporated into their songs in the past.

It shows the depth of what Winterfylleth is capable of. The whole album is absolutely beautiful. I can picture pine trees blowing in the wind on a bright day (“Æcerbot”). Other times a cold evening by a fire (“Embers”). The band is very in touch with nature and it really shines through on this release.

Downsides? Well there’s perhaps more instrumental tracks than I would like. I love the vocals and the harmonies so it’s just a minor complaint. I don’t care for the female voice on “The Nymph” reading poetry. It’s not bad mind you. It just isn’t something I tend to like.

“The Hallowing Of Heirdom” is definitely an album that prog fans should give a listen to. It’s sheer beauty will please even the harshest of critics…because there are no harsh vocals. Who knows what Winterfylleth will do next? Opeth went back to their more balanced prog death metal before going full on prog rock. Winterfylleth clearly have the talent to do all of that and more.

I have been a fan of progressive metal and progressive rock for most of my life. My music collection is insanely large. My passion for life is music...progressive music!
View all posts by Rob →
This entry was posted in ambient, folk metal, progressive rock and tagged music review. Bookmark the permalink.