Barren Earth – “A Complex of Cages” 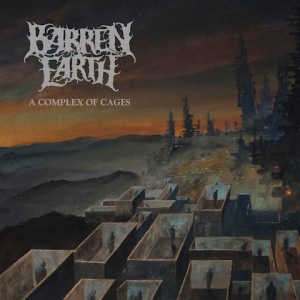 “A Complex of Cages” is the fourth full length album from Finland’s Barren Earth. It’s the second album with vocalist Jón Aldará who was not involved in the writing of the last album “On Lonely Towers.” With the songs on “A Complex of Cages,” Aldará wrote most of the lyrics and melodies. Consequently, the songs are more consistent in that area.

Aldará has a very distinct clean vocal which features plenty of vibrato and an almost operatic delivery. It’s quite over the top which is a big difference from original vocalist Mikko Kotamäki (of Swallow the Sun fame). The difference on “A Complex of Cages” is that Aldará often blends his clean and harsh vocals by either overlapping them or having them sung together. I think it just makes the songs that much stronger and the album more consistent throughout.

“A Complex of Cages” marks the loss of another founding member with the departure of keyboardist Kasper Mårtenson. Mårtenson wrote about half the music in the past, with bassist Olli-Pekka Laine writing the rest. This leaves a rather large void and some big shoes to fill for new keyboardist Antti Myllynen. The technical chops are still there and Myllynen knows his way around vintage sounds. Musically, I think “A Complex of Cages” has a bit less of a folk metal vibe than their previous albums which might be due to the change.

But change is good and Barren Earth continue to thrive on “A Complex of Cages.” Whether it’s the massive hook of “The Ruby” or plaintive beauty of “Withdrawal,” Barren Earth show a willingness to tweak their sound and try new things. To me, that’s what being progressive is all about. One of my favorite songs on the album is “Zeal” which sounds nothing like anything Barren Earth have done in the past. It’s moody as HELL with tons of atmosphere. Myllynen’s synths play a big role in the power of this song. “Dysphoria” is another favorite which is very bombastic and over the top. Just the way I love it from Barren Earth.

While many might still think of Barren Earth as a side project/supergroup (it has Kreator’s Sami Yli-Sirniö and Marko Tarvonen of Moonsorrow), after 4 albums of amazing prog metal it’s clear that Barren Earth are their own band. The sound evolves but they never lose the core of their music. When they started, I thought of them as Finland’s Opeth but now they sound nothing like that really. “A Complex of Cages” is another masterpiece from Barren Earth that embodies everything that progressive death metal should be.