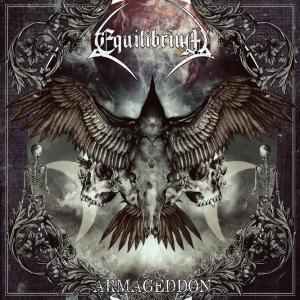 How can something so heavy and potentially evil be so damn nice?? Somehow, Equilibrium find a way to make Pagan Death Metal to be both incredibly epic and even fun. In some ways, their approach reminds me of Finntroll. Some of the instrumentation is similar but the vibe is what gets me. “Armageddon” is actually a very bright sounding album! I know it doesn’t make sense given the band and what you might assume about their music.

For example, “Heimat” sounds a lot like TSO with German death vocals over the top. The band even have multiple songs sung in English which is rather new for them. One of these tracks is called “Born to be Epic.” Now the title might seem cheesy but to be honest, it fits! The song reminds me of “Perfect Gentleman” by Helloween, as far as the keyboard part on the wordless chorus. I love that!

In fact, “Born to Be Epic” might have been a better title for this album. Epic is something that this band has always been and it’s the main reason I am into them. Everything is fucking HUGE! Equilibrium aren’t afraid to go way over the top. They go into attack mode on songs like “Zum Horizont,” which has some KILLER horns on it, and “Rise Again,” which has some great strings. Each of those tracks is fast and furious speed metal.

I do wish there was a long epic on the album but the seven minute plus closer “Eternal Destination” does work really well as the big finale. It’s big, loud and symphonic. I suppose that sums up the whole album really. Equilibrium have taken their sound to a new height. “Armageddon” is not the end but feel more like a new beginning for this great band.

I have been a fan of progressive metal and progressive rock for most of my life. My music collection is insanely large. My passion for life is music...progressive music!
View all posts by Rob →
This entry was posted in black metal, extreme metal, folk metal, progressive metal, symphonic metal and tagged music review. Bookmark the permalink.