Iron Maiden – “The Book of Souls” 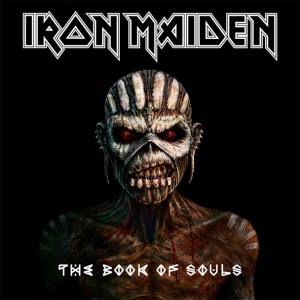 I am not going to get into the stuff that everyone knows. We all know Maiden. We all know about Bruce’s cancer. So what about this first album in 5 years? I give credit to Maiden for doing their first double album ever. And given the length of it, it is a legit double album.

On the plus side, the songs are all VERY strong. Given the time between “The Book of Souls” and “The Final Frontier,” it’s great to see that the band was able to fill a double album with great songs. My favorite is the 18 minute epic closer, “Empire of the Clouds.” Based on the crash of the R101 airship in 1930. I have always loved that Maiden writes about history. And not things that are always common knowledge either! The song is a true prog song versus “The Red and the Black” which is over 13 minutes long but is more about repeating various sections and soling, but still a good song.

The band also have shorter tracks like “Speed of Light,” “Death or Glory,” and “Tears of a Clown” which are all as catchy as anything the band have done. Performance wise, the band are still great players. Bruce does sound older and somewhat limited at times but it’s hard to say if any of that was due to the tumor. I’ve heard that the band recorded this in a more “live” setting in the studio and left any mistakes. I’ll be honest, I don’t really hear any.

So what are the problems? The main problem is the mix. Once again, Kevin Shirley has been employed as co-producer and mixer. While this isn’t as shitty sounding as the un-mastered (what in THE FUCK were they thinking?) album, “A Matter of Life and Death,” the album sounds very confined. The drums sound incredibly dry and lifeless. For an album that has many HUGE tracks, the mix basically kills the epic sound that songs like “If Eternity Should Fail” or the other 2 aforementioned long songs NEEDED. For as shitty as Martin Birch made them sound in the 80s, Kevin Shirley seems determined to keep that going.

Consequently, what COULD have been one of Iron Maiden’s best albums winds up being a slight let down due to a crappy mix. It’s a good album thanks to the songs though. It just deserved better treatment from the band and their producer. Had they worked out their parts and maybe had someone else mix it, this could have been a classic.

2 Responses to Iron Maiden – “The Book of Souls”