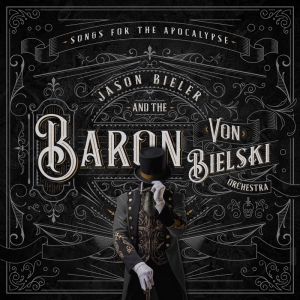 Jason Bieler & The Baron Von Bielski Orchestra is the new project from Saigon Kick mainman, Jason Bieler. While I am familiar with his well known band, I don’t know a lot of his solo material. I do own a CD by Super Transatlantic, a one off he did in 2000 with Extreme bassist Pat Badger.

Jason Bieler & The Baron Von Bielski Orchestra is basically Bieler with a few of his friends, including Badger, assisting him. Stylewise, it’s a bit like Devin Townsend but think more like Devy’s more melodic stuff. Oh and Devin does a guitar solo on the track “Bring Out Your Dead.” So there’s that as well!

The sound is big, plenty of hooks and a lot of vocal harmonies. As I always say, it’s about the songs. Are the songs there? Yes they are. Whether it’s the quirky pop infused metal of “Apology” or the straight forward acoustic rock of “Very Fine People,” the album has the hooks and the melodies. Tracks like “Annalise” are deceptively complex and layered. It’s just one of many fascinating tracks on this album.

The jazzy instrumental “Horror Wobbles The Hippo” is another favorite. There’s a lot of genres jammed into the album and yet somehow, Bieler makes it all work. One thing is clear to me, I need to go back and find more of Jason Bieler’s solo material. Given all of shit we are dealing with, “Songs For The Apocalypse” is a perfect title and the album makes for great listening on top of it!