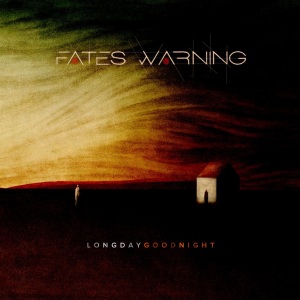 Fates Warning is one of my favorite bands, so this review has a bit of a bias. That said, my expectation for any new album by them is very high – especially on the heels of their last album, “Theories of Flight,” which was a masterpiece. “Long Day Good Night” is a lot of music – 13 songs that clock in at 72:22! – and Fates covers a lot of ground in the process.

“Long Day Good Night” is an album that shows every side of the band. It takes a piece from every direction that the band has explored with singer Ray Alder. The album has the directness and radio-ready sounds of “Parallels,” and it has the epic prog nature of “A Pleasant Shade of Gray,” PLUS the atmosphere of “Disconnected.” Sometimes it happens within one song, but more often, each song gives a nod to each period.

The album starts with the expansive “The Destination Onward,” which starts slowly and has a definite “Disconnected” feel to it before the band launch their attack halfway through. The song is an amazing opener, but Fates are great at that. “Shuttered World” is one of the heavier Fates tracks the band has ever done – great riffs from Jim Matheos, as always. The chorus is hook-laden and would sound at home on “Parallels.” This should be a single.

“Alone We Walk” is a mix of the first two songs: atmosphere and aggression. Another killer song. “Now Comes the Rain” has an opening riff that once again harkens back to the radio-friendly side of the band. This was the second single the band released, so most fans have heard it and know it. It’s at this point of the album that I realized just how great this thing is sounding. “The Way Home” would have fit well with “Theories of Flight,” with its gorgeous opening section…and then there’s the insane prog middle section where Bobby Jarzombek shows why he is one of the most underrated drummers on the planet. Wow!

“Under the Sun” is notable for its use of strings, which is something that Fates Warning has never done. And wow, does it add to this song! The other thing is the main guitar melody, which reminds me of another melody line but I can’t for the life of me think of what it is! I know I’ve heard something VERY close to it. It’s still a great melody. “Scars” was the first single, so most folks know it. Great tune that starts the second half of the album well. “When Snow Falls” is a song that sounds more like “Disconnected” or even OSI. After all, Gavin Harrison guests on drums on it and there’s a fair amount of Kevin Moore inspired keys and electronics on it.

One would assume that a 13-track album would mean no epics, but there are a few mini-epics on Long Day Good Night: “The Way Home,” plus the 11 1/2 minute track “The Longest Shadow of the Day” which showcases the whole band, including a killer bass solo by Joey Vera. The song has various styles: jazz, thrash, prog. It’s a true epic.

The album closes with a quiet acoustic number, “The Last Song.” Hopefully it’s just meant as the last song on the album and not the last song for the band. It has yet another incredible vocal by the amazing Ray Alder, who seems to get better with age. It is yet another side of Fates Warning that “Long Day Good Night” showcases.

This is easily the most diverse album the band has done, and one of the best. “Long Day Good Night” is another masterpiece from a band that has released quite a few of them. It’s also a great place to start if you’ve never checked out Fates Warning. It allows the listener to go back and explore the various paths this legendary band has gone down.