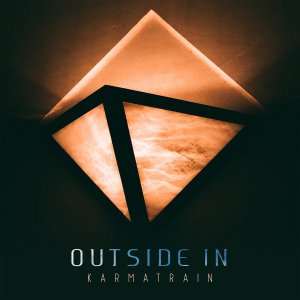 I assume what happened to me happens to many of you: weeks go by with what seems like no great new music and then the dam overflows.  I was still recovering from Intronaut’s new one Fluid Existential Inversions (featuring a career-defining performance by drummer Alex Rudinger) along with Rise Radiant by Caligula’s Horse when on one of those whims I decided to check out a band I’ve seen floating around Instagram recently, Auckland, New Zealand’s Outside In.

Bandcamp suggests song 5 “Morning Warning” as the go-to so I decided to give it a spin.  Isn’t it so weird how the mind quickly tries to attach a new sound to something familiar?  The vocal melody of the verse brought Tool to mind but that’s just a function of the musical scale used.  Just as I was appreciating the fuzzy bass tone, in-kicks the chorus.  Whatever chord changes my brain planned on receiving were not heard.  This is a good thing! The second verse features some higher-energy vocals from Mikey Brown, the chorus floats by, a very hooky B section rolls in and the song is punctuated by a grungy, anthemic declaration.  Boom. Whew.  I listened to the whole album, emailed the band, and I asked if I could write a review.  Not the usual order of business.  Is it the phase of the moon, the certain human vibration we’re all experiencing at this specific point in time, or is Karmatrain, released May 29, 2020’s progressive rock unicorn?

There is a certain neo-prog feel to the production, everything is well balanced, no issues there.  Song lengths are modest; the “epic” is track 12 at just over 8 minutes.  The bands that often pop into my mind include Enchant and Marillion.  Nice variety of feels and tempos but the chorus & hooks bring the composition into focus.  Everything you hear serves the songs.  I have a hard time finding anything to consider an unnecessary moment.  Just a few tasteful guitar solos to be found.  Songs blossom, fully realized at the end, compact but bright.  The flow from track to track and overall arc of the album is excellent.  Drummer Adam Tobeck is tasteful and syncopated, never overplaying yet always supporting the forward motion.  Elliot Park’s bass is solid and very tasteful, jazzy; Bridges is a great example of being both melodic and supportive.

Pieces of melodies float into my consciousness throughout the day, lyrical phrases will come and go.  The lyrics seem to entail a journey, literal and metaphorical, of an individual and of a society.  “The world looks broken when you focus on the pieces; if this isn’t what we wanted, then why are we letting it happen again?” from “The Garden of Light.”

After a dozen spins I’m still identifying the dual guitar parts. Guitarist/songwriter Jonnie Barnard and guitarist Joe Park are very complimentary.  I’ll bet these songs are not based on riffs but are crafted around a foundation.  The real rocking moments are used sporadically so when they hit it feels like a big deal; the “it’s not easy” part of The Ferryman is emotionally and rhythmically heavy.

Another entry into the best last track contest (includes The Contortionist’s “The Parable” & Caligula’s Horse “The Ascent”) is I Am Not The One.  A thrilling, emotionally-charged song, the way the song climaxes is the real deal: vocal harmonies, guitar chords, and the lyrics have a Yes-ness to them and to lay it over a 5/4 time signature it’s a goosebump generator.  And the lamest cliché of them all is 100% accurate – I’m left wanting to come back for another listen.

BANDCAMP IS WAIVING THEIR PROFIT JULY 3rd SO IT’S A GREAT DAY TO PURCHASE THIS AND RAISE MONEY FOR IMPORTANT CAUSES!