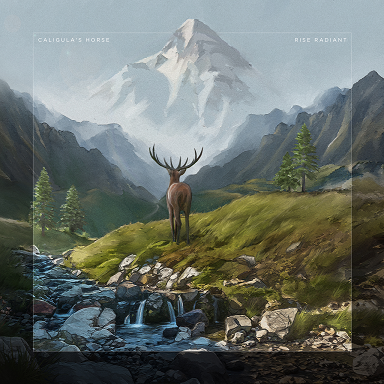 Caligula’s Horse returns from Down Under with album number 5. Rise Radiant is another logical step in the band’s evolution. I recently went back and walked my way through their discography, while the core of what make them them is still present, you can hear along the way that they seem to ever inch their way heavier and heavier and this album is no exception. There are some fantastically heavier moments on this one but still some of their signature softer ones.

The band is almost the same this time around, with the exception of the change in bass with Dale Prinsse. All the others are here: Jim Grey on vocals, Sam Vallen on lead guitar, Adrian Goleby on guitar as well, and Josh Griffin on drums. And I must say that the band are as tight as ever. Let’s dive right into this beast.
The Tempest comes raging in with some quick drum work and some nice djenty guitars and settles into what they are known for: Time changes and melodies. Great lead in track.

Slow Violence was one of the initial singles, see video below, and is a nice djenty rocker. Jim has an abrupt, brooding style to the vocals in the verses that I dig but still those ever present and flawless vocal harmonies on the chorus.

Seeing us back in a more lighter fare, Salt reminds me more of Caligula of old. Great drum work here too. This song shifts moods and styles to boot: Alternating calm and rocking. Nicely balanced. I’ve heard some say you can hear similarities to Haken on this album and, granted, there have been some similarities all along between their styles. But there does seem to be a mergence going on with both band’s sounds. But it works. And this is clearly Caligula’s Horse. But you could play a section of this song for someone and they might go “Is this Haken?”

The shortest track on the album is Resonate, and I kind of feel that is a crime. This track sees them channeling Seal quite nicely, a la, the Kiss from a Rose era. Would love to have heard this expanded upon. But it’s calmness helps us transition nicely into…

Oceanrise with its misleading calm and quick intro before the drums kick in. Another slice of Classic CH. “Be the flood. Be the ocean.” Jim, soft and gruff, delivers the verses but then lets loose on the chorus. Why is their music so singable?

Up next we get another heavy rocker in Valkyrie that shows these guys are at the top of their progressive game. Love the heaviness to this. And as much as I love their softer side, would like to hear more of this side too.

Speaking of their softer side, Autumn slams on the brakes with a slow and soft start with Jim over acoustic guitars. But it doesn’t stay that way. It’s funny the last track is called The Ascent, but it is this one that slowly builds to a huge sounding close. I love songs that pay off this way. You can tell there is an underlying tension waiting to unleash and when it does… glorious. This could totally have been an album closer.

And, just like that, we abruptly hit The Ascent. Another classic slice of CH, with all their hallmarks. Jim’s soothing vocals along with the driving drums, melodic guitar, and pounding bass. What’s not to love here. That instrumental section is pretty lit too with a nice little guitar solo from Sam Vallen. I think they shine most in their softer pauses between the rock… that calm between the storms. And you get that nicely here just before it opens up and carries us to the end with some great layered vocal melodies. Though, personally, I think Autumn may have worked better as the closer. But that is just me.

Sadly, once again, the bonus tracks/covers were not part of the review copy. But I am glad to see that they are on the physical disc being sold! I was thoroughly disappointed last time when I found that Atlas Revisited wasn’t on the CD but was on the streaming platforms. That was a head scratcher.

And that’s it… over too soon. Another classic from Caligula’s Horse. Though, I will admit, it didn’t grab me as immediately at first as In Contact did, but with repeated listens, it really shines. So, check it out! And don’t be so quick to brush it off if it doesn’t grab you at first!