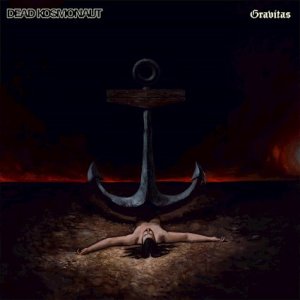 I’d never heard of the Swedish band Dead Kosmonaut before getting sent this promo but I liked the description so I gave it a shot. They definitely merge Sabbath and Maiden but also have a Uriah Heep vibe going as well. Their sound is rooted in that 70s metal/rock scene but they don’t sound “old school.” I would even include Mastodon in there as well.

So “Gravitas” is basically all of this mixed together without exactly sounding like any of them. Dead Kosmonaut walk a line between being unique and yet still fitting in as well. Lead vocalist Pelle Gustafsson has a really stong voice and I know he reminds me of someone but I am still not exactly sure who. He has good range along with a nice grit as well. The songs are solid though I am not sure the hooks are quite as strong as I would like.

The playing is off the charts though! The soloing is just amazing. I do love it when band members trade off solos and they are really good at it. That’s when the band really take off. “Black Tongue Tar” and “Iscariot’s Dream” make a solid 1-2 punch to start off the album. But I am drawn to the longer tracks. “Hell – Heaven” is a slow burn which shows that Dead Kosmonaut can dial it in when needed.

The two part closer “Dead Kosmonaut” make for a perfect way to close out the album. Part I is a short choral introduction which is anything but filler. Part II is the grand statement. The organ makes the song and I wish they used more keys on the rest of the album. Although I kept waiting for the band to explode at some point but this song is not that type of closer.

Dead Kosmonaut are yet another talented Swedish band who have a great vibe. “Gravitas” won’t change the world but it does make for fun listening and we all need that. If you like aforementioned bands or the direction that Opeth has gone of late, you should give this album a spin.