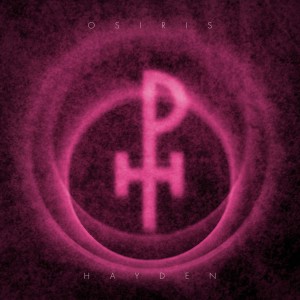 The album Osiris Hayden is the fifth release from the Finnish band that was known as Mr. Peter Hayden, now PH.

Osiris was a god in ancient Egypt who was considered the Lord of the Earth, life, death and resurrection.

It is a resurrection of sorts when a band releases a new album. Old sounds are sloughed off and new sounds emerge.

To me, this is all new, as PH/Mr. Peter Hayden are not a band I knew before I was given this album to review! And yet again, the internet (and Rob) have helped me to discover and learn more about some amazing music I might not have otherwise known of.

The track Thr33 of Wands leads off the album, rising to a steady ominous beat. There are snippets of voices as the song builds and then segues into the next track, Emergence

This set of tunes fits as an atmospheric soundtrack to a dark-themed video game. The music has a heavy and mysterious feel as it draws me in to listen and pay attention. Consider it psychedelica, perhaps, with electronic textures.

Tachophonia closes the album, sounding like a final, gothic battle as a voice intones, in my imagination, the narration of a closing scene

I found Osiris Hayden to be an engaging and intriguing listen. Hearing this album has prompted me to want to check out their other releases.

Check out the video below to hear a track from the album.