Posted on October 11, 2019 by restlessamoeba 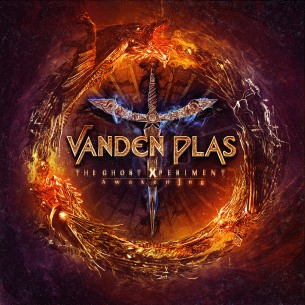 One of the mainstays of prog metal are back with part one of another two part concept album ( part two planned for next fall). This album is both short (6 tracks) and long (about 50 minutes). So, yeah, most of the tracks are on the longish side. And the write up from the band says this one is more progressive. I hear that in parts. But one thing I can definitely say is this one is very in your face. So if the last couple weren’t much your thing, with their more orchestral feel, this one might be.

The story, to lightly paraphrase, is about a guy named Gideon, who loses his significant other and starts digging into the paranormal to help his war with his demons. But it only causes more trouble. Trouble being opening a hole to hell. I can hear that in parts but honestly, with the mix, I can only make out some of what is being sung. A lyric sheet would be awesome. So I’ll just trust them on the story.

Starting things off is Cold December Night, with some nice heavy riffage and into some single chord chugging for the verse before hitting a nicely melodic chorus that’s already got me singing along. Ok. Mostly along. Don’t know some of the words. Interestingly, I think I hear a keyboard/piano in there, but man, is it buried under the guitars. Still dig it though.

The Phantoms Of Prends-Toi-Garde is another great rocker with a nice piano interlude that trades off with some nice riffage once again. I’m starting to feel like I’m not able to detect the bass much either. I’m sure it’s there, blending in, but I’m not really picking it up.

We then get a more laid back song with Three Ghosts, and it’s almost a progmetal ballad, if you will. Now I’m hearing piano, bass… everything. The piano is prominent in the verses. We are treated to a great guitar solo in the first instrumental section that I found myself getting a bit lost in and that is a good thing! Flowed perfectly.

Devils’ Poetry, the longest track on the album at almost 10 minutes, starts off with some solo keys that quickly get kind of buried in the mix with the guitars again but not so much you can’t hear them at all. The keys then shift to a more symphonic sound that stands out a bit more. This is definitely a guitar focused album and that isn’t a bad thing for prog metal. 😁 This is definitely more on the prog side of things in the instrumental sections with some nice solos on keys too. And hell…. let’s throw in some oboes? At least I think it’s oboes. Someone correct me here. Love the orchestral break in this track.

Fall From The Skies, only slightly shorter than Devil, starts of as a slow orchestral/piano piece and then kicks in full band once again. We get some keys that are very reminiscent of Dream Theater to me. Actually this whole song is.

The last song, and almost the shortest, The Ghost Xperiment, is a standard rocker for them. And doesn’t feel like an album closer. either. I guess it kind of makes sense given this is the middle of the story, but I still feel it should have had a somewhat of a “finale” feel.

Argh. I love long songs (and I cannot lie (I’m sure I have made that joke before)) but with so few tracks it feels over too soon! I feel this would have worked better as a whole, rather than a two parter. But hell, can’t really say that either without hearing part two.

So… is it their best work? Nope! Is it good? Yep! True, they don’t really break any new ground here and nothing really blew me away. But it’s a solid enough album. Give it a go and let me know what you think!

PS- for some reason the singles released so far are the first and last songs on the album. I always find it odd when the last track of an album is released prior to an album release, especially on a concept album. Kind of gives things away. Kind of. Anyway. Check them out below.