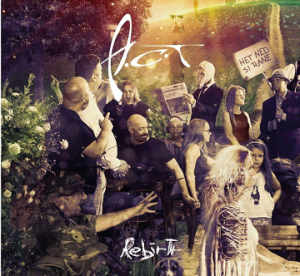 One of the first “new” progressive rock acts I got into back in the day. Feels weird to say that. But at a time when I only really knew of Yes, Dream Theater, and Rush, a good friend of mine introduced me to a few bands that helped enlarge my world of music appreciation. A.C.T was one of those bands and I will forever be grateful for his help in expanding my horizons (ya hear that, Frank!?).

The album that he introduced me to at the time was The Last Epic, and it did nothing short of blow my mind. Encapsulating the best parts of ELO, Styx, Elton John, and even a little Yes, along with a masterful hand at story telling; they were EXACTLY what I had been looking for in a band. Digging further, they lost me a little on their other albums (the earlier ones and Silence). While good albums, they didn’t resonate with me like The Last Epic. But then Circus Pandemonium came along and I was all “A.C.T are back!!!” And now with this EP, they are still here!

Waking up to the first track, The Ruler of the World, the sounds of an early morning greet us and that of a crowd at a cocktail party? But we quickly kick into pure A.C.T Everything you would expect from one of their songs. Feels a bit of a throwback during the verses where I can hear parts of past songs throughout and even a nicely soaring chorus to boot and some samples along the way. Check out their video for it below! This track and the next one, Running Out of Luck, sound very much like they could have been on the Last Epic. Which works for me!

A Digital Affair takes a turn down a path I haven’t heard them go before. A very sort of electronica style… a digital affair, off you will. ;-P  The verses are from the perspective of a humanoid in love and the chorus the human’s response. Once again, everything you expect from A.C.T with a nice unexpected twist in style. Love it!

And then Meet the Past is back to the Act we know and love, while A Broken Trust, the last track, hits another style that feels a bit different for them, and even gets heavy in one part. Really loving this track.

And… that’s it. It is an EP after all. But a 22 minute one. And to paraphrase one of my favorite lines from “O’ Brother Where Art Thou?”:

“One third of a(n A.C.T album) would only arouse my appetite without bedding it down.”

But this is definitely worth your time! And it HAS been 5 years, so I’m sure ya’ll are ready for more. Looking at the release dates, they seem to be getting farther and farther between releases. I really hope we don’t have to wait another 5 years. But the music industry has changed. Maybe having more EPs more often will work better? Time will tell. At least we have this now. And it seems they are releasing this one physically first, almost a whole month before the digital release.

1. The Ruler of the World

2. Running Out of Luck
3. Digital Affair
4. Meet the Past

This entry was posted in progressive metal, progressive rock and tagged music review. Bookmark the permalink.