Witherfall – “A Prelude to Sorrow”

Posted on February 3, 2019 by restlessamoeba 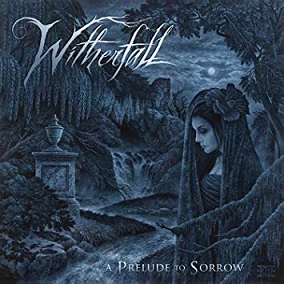 Another review I am woefully behind on getting out there.

Witherfall only had one album out before Warrel Dane passed, but they were already channeling that Sanctuary and Nevermore vibe. And I ate it up. And apparently Sanctuary took note too. There was a major tour set for late last year with Sanctuary opening for Iced Earth. But after Warrel passed, Sanctuary decided to continue on and use the shows to pay tribute to Warrel. So the band chose Joseph Michael of Witherfall (who I promise this review is about. I swear!) to take over vocal duties on the tour. And he nailed it. Big time. They have even decided to proceed with making another Sanctuary album with him on vocals. So if you are a fan of Sanctuary or recall liking them, give this one a chance! On to the album!

I do want to note that the band lost a dear friend and brother in their drummer Adam Paul Sagan, who passed in 2016 and they honor his memory with this album. Joseph Michael noted in this interview with their label, Century Media: “We knew what was going to happen. A big chunk of this record is about Adam’s death. How fragile life it is. How little time we actually have. Not just people who die from cancer, but all of us. It’s a bit of an old cliché about how many summers we have left. So, the mood on A Prelude to Sorrow is pretty dark and somber.” So that should tell you what is in store here.

We dive right into the melancholy and despair with the title track, A Prelude to Sorrow. How many albums have we gotten who have been named after their short intro track? But it is fitting here. Then it is into a full on, Sanctuary soaked, We Are Nothing. If you needed to be convinced that Joseph Michael is a perfect successor to Warrel, look no further (Just kidding. Listen to this whole thing). Joseph hits all of the notes. The menacing snarls and the highest shrieks.  All here. This first track is one of the longest ones on the album and goes through many moods. The opening shredfest, to the acoustic based middle with some gorgeous guitar solo work, and then back into the metal onslaught. Perfect one-two punch.

Moment of Silence continues the thrashiness and also has their trademark layered vocals belting out the very melodic, yet slower, chorus. And then onto Communion of the Wicked, where I am loving the bass and the always present vocal harmonies that are, as usual, drenched in melancholy. With an acoustical break here as well.

Maridian’s Visitation is a slower number, ethereal in part. Nice acoustic guitars and beautiful melodies. And then closes with a terrifying, synth laden barrage of guitar, which slides right into Shadows. This one starts off in a very Tourniquet style opening (That is the closest reference point to my mind right now). The drums marching forward with anger and a driving guitar which give way to another melodic chorus as the sadness continues.

Ode to Despair is another slower burn with some “kick it in” moments during the chorus. Chills when the higher pitched “time just slips away” unleashes. This is one of my favorites on this album. My nostalgia for Sanctuary is peaking nicely with this one.

The Call is a creepy interlude leading into the next longest track on the album, Vintage. Gives us as hopeful of an ending as you’ll get given the subject matter (their fallen brother) with some great melodies and fantastic guitar work. And again the awesome Wails of Joseph. There is a beautiful and goosebump inducing ending to this one. I honestly don’t know how to react to it when I hear it.

And Epilogue closes out the album nicely with an acoustic, almost Alice in Chains sound.

So we have another winner of a dark and melodic metal album on our hands. I’ve listened to this album many times since I purchased it. It is definitely not a light listen. It is emotionally exhausting but sometimes it is good to just sit back and process it. Check it out and let me know what you think!

I also want to note they have an EP coming centered around the track Vintage from this release. Has a couple of covers on it. Hope to review it as well.