Editorial: Why does Derek Sherinian still have a grudge against Jordan Rudess? 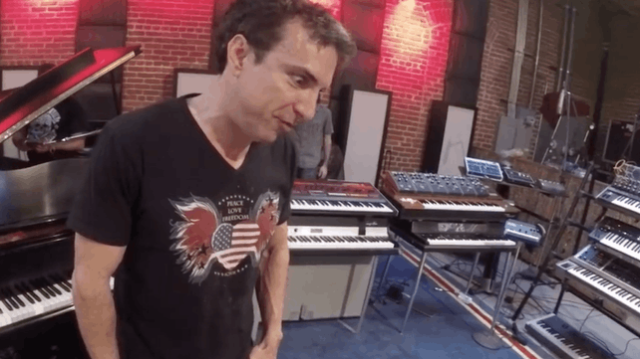 Twenty years ago (I can’t believe it’s that LONG), Jordan Rudess was asked to join Dream Theater. The problem was the band had a keyboardist in Derek Sherinian. Sherinian was a really good player too. But both John Petrucci and Mike Portnoy felt more chemistry working with Rudess on the Liquid Tension Experiment album(s). Moreover, Rudess was actually the FIRST choice to replace Kevin Moore back in 1994.

Back in 1994, the band needed a keyboardist to play the Foundations Forum gig that they had scheduled. Moore had just left and they were in a bind. They had heard of Rudess and knew he was an incredible player. So he played the one show with them. They offered him the job and he declined citing family restrictions at the time. So the band looked at TWO other keyboardists. One of them was Sherinian. The band was split 2-2 on which to hire (as a sideman). The tie breaker was that Sherinian went to Berklee.

After “Falling into Infinity,” the band was struggling. Portnoy was threatening to quit. Following the LTE album, they realized they should play with musicians that they wanted to. So they asked Rudess to join for a second time. He said he would. So they had to fire Sherinian even though he had done nothing wrong. But clearly he wasn’t their first choice. Sherinian was recording his first solo album “Planet X” at the time and would go on to record more and more insanely proggy albums. Clearly he was out to prove that DT had made a mistake and underestimated him.

20 years later, he clearly isn’t over it. He formed Sons of Apollo with Portnoy, who had been one of the guys who fired him from DT. Apparently, that’s fine? Instead, Sherinian has made multiple comments in videos, on Facebook and in print disparaging Rudess. His passive aggressive insults reference “apps,” “music stands” and other things that Rudess has used. It’s rather sad really.

The fact that Sherinian was canned from DT because the band wanted Rudess from the start is NOT Rudess’ fault. Portnoy has apparently made Sherinian believe that Rudess is at fault and not Portnoy himself. Look, I think Sons of Apollo are a good band. They are not better than Dream Theater. Why? They have one fucking album. That album is better than the last few the band made with Portnoy and better than the Astonishing but so what? Sherinian wants a competition. Music is NOT a competition and DT has not said a bad word about him or Sons of Apollo.

GROW UP, DEREK! LET IT FUCKING GO! Show some class, man. If you wanna be mad at Petrucci, okay it’s been 20 years but go ahead. Oh, he has played on your solo albums? Ok then. Be mad at Portnoy then! Oh, you need him for the success of Sons of Apollo? Ok then. But to be pissed at Rudess for being the guy the band wanted to replace Kevin Moore from the start makes no sense to me. Sure you had every right to be mad about the situation. But why have a grudge against him now? Wasted energy. Move on, Derek.

10 Responses to Editorial: Why does Derek Sherinian still have a grudge against Jordan Rudess?