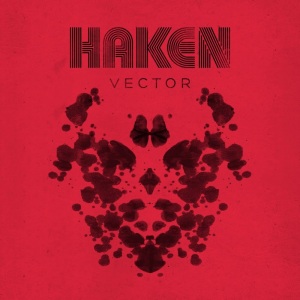 Regardless of whatever I type in this review, the new Haken album is going to please many people and sell really well. I could just leave it there I guess. But since I try to be the “objective” reviewer, I suppose I can press on with my perspective. Their last album “Affinity” blew me away. It was fresh and showcased that they could try new things and still sound like Haken.

The bottom line was that the songs on “Affinity” were some of the band’s best written. So “Vector” has a tough task to follow that album. Unfortunately, it is not as good as “Affinity” or really any other Haken album. That’s not to say that “Vector” is a bad album because Haken would have a hard time making a bad album. I will say that the album starts off rather shaky before it finds it’s legs and ends quite strong.

The opening track “Clear” is a throw away intro which I am so sick of. Why do band’s waste time on them? But then the album properly starts off with the first single “The Good Doctor” which didn’t do it for me. The problem is the band sound like they are trying to hard to mimic what they did on “Affinity.” The whimsy quirky 80s sound effects, electronic drums and all that. It worked before but here it just doesn’t. Plus the transitions are really awkward.

The next track “Puzzle Box” suffers from the same issues and it’s during this track that I start to wonder if this is an album of outtakes from “Affinity.” Things improve on “Veil” which sounds more like older Haken with a slight nod to their new obsession with djent. THIS is a good tune. The transitions are smooth and the song kicks ass.

“Nil By Mouth” reverts back to the band trying a bit too hard to be clever with the boops and beeps that littered 80s music. And it’s annoying at times on the song. They attempt to freshen it with a very TesseracT guitar approach. The song itself is good despite the forced arrangement. A shame.

The best track for me is “Host” which sounds like NOTHING the band has done before. It’s a ballad of sorts but not the prog metal type ballad that “Bound by Gravity” was. The song has awesome keys plus some nice trumpet work. Yes trumpet. It’s ambient yet jazzy at the same time. A truly beautiful track.

“A Cell Divides” is the closer and while it’s a really good song, it’s an odd closing track. There’s no feeling that this is the proper end of the album. It makes me also realize there are no HUGE epics on “Vector.” “Veil” is close to it at 12:41. But there’s not another one. Thus the album is short by Haken standards at 44 minutes or so.

And that’s not a big deal if it’s a solid 44 minutes. But with a throw away intro and a few other weak tracks, too much is riding on “Veil,” “Host,” and “A Cell Divides” to carry the album. Thus for me, it is indeed their weakest album to date but again, when you look at the strong catalog they already have, this was going to happen. Still, people please many people and it will sell really well. I guess I could have stopped there.