Manticora – “To Kill To Live To Kill” 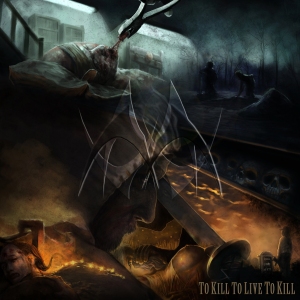 Prior to this, I had never heard of Manticora. And on paper, not only should I know who they are but I should be a fan of theirs. Their new album “To Kill To Live To Kill” has all of the elements for success: epic sound, KILLER riffs and even a bit of a concept behind it. Yet even after quite a few listens, I still have reservations. So why is that? It’s the usual reason.

The album starts off with a minute intro piece and yes, I usually find that to be a waste but conceptually it actually works for the album. “Echoes Of A Silent Scream” kicks in and it sounds awesome for sure! Massive sound and a killer groove. And then it gets almost brutal…but then lead vocalist Lars F. Larsen starts singing and I have a problem. He has a very odd, almost strained sounding voice. He sounds slightly off key eventhough he really isn’t. And it’s like air being sucked out of a balloon for me.

OK, so then “Through The Eyes Of The Killer – Towering Over You” comes on and BAM, more killer riffs. I am banging my head and life is great. The track builds up great. Larsen starts off singing a bit more within his lower range which I can tolerate fine. I think I’ve found the issue. While his tone still isn’t great, it’s less annoying when he dials it in a few notches. This is one of the best tracks on the album.

Another favorite track for me in “The Devil in Lisbon” and why is that? It’s an instrumental! Sorry Lars. The music is ridiculous on this one too. Seriously, it’s crazy good. It’s followed by the very epic sounding “Growth” which again sounds awesome until Larsen starts singing. It’s a shame. It’s always the higher end that sounds off. The music is so good that I actually have tried like hell to just ignore the vocals, especially the pre-chorus of “Growth, growth, growth” which is especially questionable. The main chorus isn’t as rough.

So “To Kill To Live To Kill” is an exceptional album musically. Manticora blend power metal, groove metal, symphonic metal and prog metal into their own epic sound. The band can flat out play and the production brings out the best of that. If this album was all instrumental, I’d probably give it a perfect score. But it isn’t. I’ve listened to it over and over with the hope that I will get used to Larsen’s voice and to an extent that has happened. But that doesn’t make it easier. He sounds okay at times but if Manticora had a high caliber singer, this album would be essential. Oh well.

1. Piano Concerto no. 1 – B Flat minor…
2. Echoes Of A Silent Scream
3. Through The Eyes Of The Killer – Towering Over You
4. Katana – Awakening The Lunacy
5. The Farmer’s Tale Pt. 1 – The Aftermath Of Indifference
6. The Devil In Lisbon
7. Growth
8. Humiliation Supreme
9. Nothing Lasts Forever
10. Katana – Opium
11. Through The Eyes Of The Killer – Revival Of The Muse That Is Violence
12. The Farmer’s Tale Pt. 2 – Annihilation At The Graves

I have been a fan of progressive metal and progressive rock for most of my life. My music collection is insanely large. My passion for life is music...progressive music!
View all posts by Rob →
This entry was posted in cinematic metal, groove metal, power metal, progressive metal, symphonic metal. Bookmark the permalink.

3 Responses to Manticora – “To Kill To Live To Kill”