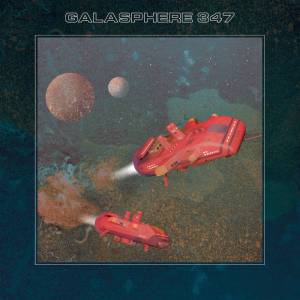 On paper, the self titled debut by Galasphere 347 should be amazing. The band features members of White Willow, Henry Fool, Änglagård, The Tim Bowness band, Weserbandland and Necromonkey. But none of that matters, does it? The question is how good is the music?

Well there are only three tracks so the album has the blueprint of classic 70s prog. The keys are all old school plus there’s some flute. But the performances around all that are lacking. Vocally, Stephen James Bennett just isn’t strong enough. Music like this deserves power and he just doesn’t have it. Lyrically, it’s not terribly interesting either. He reminds me a bit of Tim Bowness and to be fair, I think Bowness wouldn’t fit this band either.

Drummer Mattias Olsson of Änglagård can certainly PLAY and yet on the opener “The Voice of Beauty Drowned” in particular, he sounds out of sync with the music around him. This sounds more like 4 different musicians than an actual band. The saving grace on every track is keyboardist Ketil Vestrum Einarsen who seems to have plenty of solos and sounds at his disposal. Plus his flute is stellar as well.

But none of the three tracks are compelling. It’s fairly generic symphonic prog with the occasional fireworks display in the middle. I’ve heard it before and I’ve heard it better too. Even the mix by Andy Jackson does little to impress. This is very safe and dull; two words that I do not like in my prog rock.

1. The Voice of Beauty Drowned
2. The Fallen Angel
3. Barbarella’s lover

I have been a fan of progressive metal and progressive rock for most of my life. My music collection is insanely large. My passion for life is music...progressive music!
View all posts by Rob →
This entry was posted in art rock, neo-prog, progressive rock and tagged music review. Bookmark the permalink.