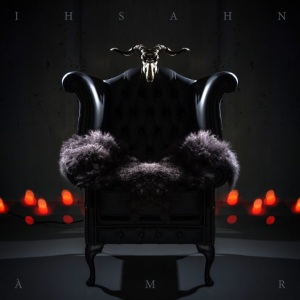 In my opinion, Ihsahn is a musical genius. I don’t use that term lightly either. The list of people that I classify as a musical genius is short. It’s much shorter when I limit it to living legends. Every album that Ihsahn has released has been amazing and his latest “Ámr” is no exception. He does tweak his sound a little from album to album, which is part of the genius.

On “Ámr,” Ihsahn has taken pieces of his last few albums to concoct a new recipe. The key being “Das Seelenbrechen.” That experimental album has opened new doors on both “Arktis.” and “Ámr.” For example, there are two “ballads” on “Ámr.” Before you worry, these are ballads for Ihsahn so they are both melodic and beautiful yet dark and foreboding. “Sámr” has pop sensibility but still a black metal heart while “Twin Black Angels” would be a hit if this were some warped alternate reality. He dabbled with a lot of melody on “Das Seelenbrechen,” so none of this is a surprise.

Another notable difference on “Ámr” is the sound. It has a more compact sound and yet still epic at the same time. The compactness comes from the drum sound which was achieved by long-time drummer Tobias Ørnes Andersen using a very dampened acrylic drum kit. The epicness was achieved by Ihsahn’s use of synths. Past albums have often leaned on orchestration but this time synths are quite prominent.

What’s interesting is how heavy and evil Ihsahn can make synthesizers sound. Whether it’s the opening track “Lend Me The Eyes Of Millennia” or the equally twisted “In Rites of Passage,” the synths are the key to how strange the song sounds. It’s a bit like “South Winds” on the last album “Arktis.” Ihsahn doesn’t use any guest vocalists on this album which I like. Though he has said he thinks his clean vocals aren’t great, I disagree. He has a great voice and tone plus his harsh vocals can peel paint off a wall.

Other than himself and Andersen, the only other musician is Opeth guitarist Fredrik Akesson who contributes a solo on “Arcana Imperii.” It’s an excellent solo to be sure but Ihsahn is an incredible guitarist himself and “Ámr” is chock full of awesome solos. So what’s not to like? I suppose some people might think at 44 minutes that the album is a little short but I would rather have 44 killer minutes of music than risk any filler. But then again, Ihsahn has never done filler.

Another album, another masterpiece. Yes I admit that I am biased when it comes to Ihsahn’s music. He combines so many things that I love about extreme metal, avant-garde music and truly progressive music. It’s a perfect match for me. “Ámr” is another dark, intense album full of texture and dynamics. It’s Ihsahn at his very best…as usual.