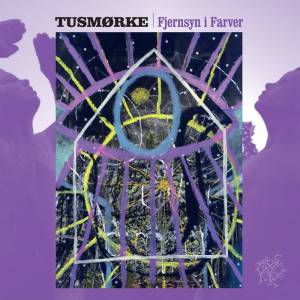 Tusmørke are a band that, on paper, I should like a LOT. So when I checked out their last album, I had somewhat high expectations. But after trying a few times with “Bydyra,” I found it too folky and child-like for my taste. I know that was by design but it just fell flat for me. So I skipped reviewing it. Now Tusmørke are back rather quickly with a follow up, “Fjernsyn i farver.”

Obviously, my expectations were quite low after the last album so I was quite surprised (pleasantly at that) to find that this was much more my style. Yes it’s still very much on the acoustic folk side of prog, but the Norwegians have more of a classic 70s prog vibe along with that folk sound. It has even traces of psych rock as well. The one downside is that I am not as sold on the vocals as I’d like to be. I’ve noticed that lately with other bands like Jordsjø and Malady. The musicianship exceeds the vocals by a lot.

I guess when it comes to Norwegian prog, I compare everyone to Wobbler when it comes to vocals. Fair or not. To be quite clear, this is a fine album overall and the vocals are good. Things get off to a whimsical somewhat odd start with the title track which uses flute and a throbbing bassline to sound like a strange cartoon has started.  Again, the music is awesome but the vocals sound a little flat, both in tone and pitch. Still, it’s a head-tilter of a track.

“Kniven i kurven” uses both the flute and bass in a more traditionally prog sound, along with violent piano chord. The chorus on this song is the most memorable. I have no idea what is being sung since I don’t know Norwegian but it’s so memorable that I sing along anyway. One reason that I love bands like Tusmørke is the keyboards. Whether it’s piano, mini moog or any vintage sound, they deliver it. “Borgerlig tussmørke” is another example with the piano and keys weaving around with the flute. It really works.

But then, “3001” sounds like an 80s video game when it starts out which doesn’t work. The main part of the song is also a little too awkward for me. They just never quite get it right. Then, “Death Czar” has English lyrics which of course helps someone like me. The song reminds me a little of Atomic Rooster for some reason and it is one of the best tracks on the album because of it: English lyrics or not. The nearly 10 minute “Tøyens hemmelighet” has some KILLER bass on it and shows how Tusmørke can really rock out. It’s hard not to bop your head around to this music.

While I definitely like “Fjernsyn i farver” a lot more than their last album, there are too many things that would keep me from listening to it on a regular basis. One major reason is the vocals. When you think of all the classic prog bands, they had a top of the line vocalist: Jon Anderson, Peter Gabriel, John Wetton, Greg Lake, etc. While some bands like Camel may have been album to flourish with Andy Latimer’s less than perfect vocals (I love Andy so relax!), it’s important for newer prog bands to make sure that the vocals are given the same importance as the music.

I have been a fan of progressive metal and progressive rock for most of my life. My music collection is insanely large. My passion for life is music...progressive music!
View all posts by Rob →
This entry was posted in art rock, folk rock, progressive rock, psych rock and tagged music review. Bookmark the permalink.