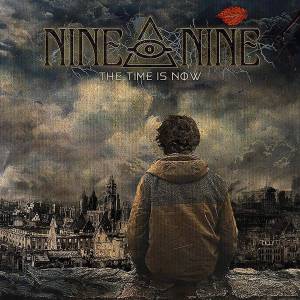 NON is short for Nine O Nine. They are from Portugal and part of the reason I decided to review their album “The Time is Now” was I did hear SOME potential. They are good musicians, they understand how to write a hook and bassist Sérgio Duarte has a listenable voice. So the main question I had after the initial sampling of their music was how good are they once I dive into the music deeper? I was about to learn a lesson.

I have heard of the band’s guitarist Tó Pica, granted his solo material didn’t really do anything for me but this is about the band and not one person. Pica wrote the music and Duarte wrote all the lyrics, except for a Depeche Mode cover. The title track kicks off the album and the chorus is the key to this song. The verses are just okay but the chorus is quite good.

One complaint is that the drumming is inconsistent on the whole album. At times it drives the track, other times it sounds like the track is driving the drums. The riffs on the album are pretty strong but there’s almost a pattern at times. Heavy riffing verse and wide open riff on the chorus. “The Way Back Home” does sound quite similar to the title track, but more bland.

“Beauty Femme” veers into boring radio ready rock balladry. Next is the Depeche Mode cover “Never Let Me Down Again.” I’ve never been a fan of the band and once again, Cardoso does more pitter pattering on the drums rather than take control of the song. “Aquilam” isn’t terribly memorable while “King” has a very King’s X like intro riff that is hopeful. Sadly, the song is very listless.

Sadly there’s not enough left in the album that quite works for me. “Big Event” does have a good riff but the song itself isn’t good enough to support it. “Sofia” ends the album with a whimper. NON have some talent but are too generic to really keep my interest for 50 minutes. “The Time is Now” is the best track and I suppose aptly named since everything after has less urgency.

I have been a fan of progressive metal and progressive rock for most of my life. My music collection is insanely large. My passion for life is music...progressive music!
View all posts by Rob →
This entry was posted in metal and tagged music review. Bookmark the permalink.