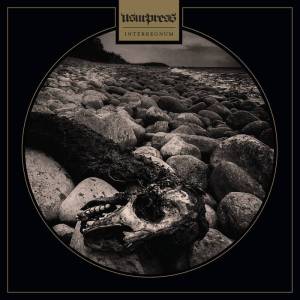 I passed on reviewing the last Usurpress album “The Regal Tribe” and it’s one of those times that when I did pass, I knew I had fucked up. My excuse at the time was that I was buried in reviews so I had to pass on some albums that I might not have previously. When I saw the press release for the new album “Interregnum,” there was NO WAY I was going to pass again. And that was a good call on my part.

Usurpress have one foot in the classic 70s prog rock era and the other foot in the mid 90s raw death metal era. This makes for a fascinating combination. You might say they are like Opeth but that’s not exactly the case. Maybe if you took the last few Opeth albums and merged them with the FIRST two Opeth albums, you might be closer to what Usupress are about.

The band added jazz drummer Stefan Hildman and keyboardist Erik Sundström to the recording sessions and each play a MAJOR part in what makes “Interregnum” such a great album. The songs are more complex at times and have a ton more atmosphere. The opening track “A Place in the Pantheon” does have spoken word which as everyone knows I don’t like. Yet, it doesn’t sound cheesy at all. In fact, vocalist Stefan Pettersson delivers it with such darkness that when coupled with Sundström’s keyboards, it’s a great track.

Tracks like “In Books Without Pages,” “Ships of Black Glass” and “The Iron Gates Are Melting” all have a firm grasp on prog rock while keeping true to the band’s death metal roots. It’s funny because I wouldn’t exactly call this progressive metal. It’s like a death metal band doing prog or even a prog rock band doing death metal.

The press release said “an unholy mix between Camel and Bolt Thrower” but I don’t really hear either of those bands specifically. But it gives you an idea of the disparate influences at play here. Yes I went back and BOUGHT “The Regal Tribe” since I fucked up by not reviewing it. Don’t make the mistake I did and miss out on Usurpress, this time or any other. If you like something unique (which can be hard to find these days), you need to give “Interregnum” a listen.

Tracklist:
1. A Place in the Pantheon
2. Interregnum
3. In Books Without Pages
4. Late in the 11th Hour
5. Ships of Black Glass (I: Shards, II: Black Echo)
6. The Iron Gates Are Melting
7. The Vagrant Harlot