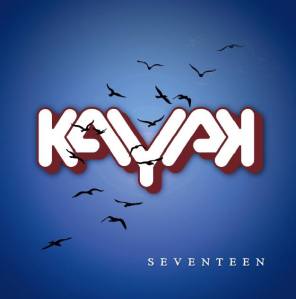 When comes to actual progressive pop, two bands come to mind for me: Supertramp (one of my favorite bands) and Kayak. Each band embrace the melodies and hooks of good pop music while maintaining the high standard of progressive rock. Kayak have veered to the extremes of each side over the years. There were albums that were overly poppy like “Starlight Dancer” or “Phantom of the Night” or “Periscope Life.” And there were out and out overblown rock operas like “Merlin” or “Cleopatra – The Crown of Isis” or “Nostradamus – The Fate of Man.”

Personally, I prefer when Kayak combine the two into a more balanced and cohesive album, like on “Royal Bed Bouncer,” “The Last Encore” (my favorite Kayak album), “Close to the Fire” or “Coming Up for Air.” On their aptly titled 17th album called “Seventeen,” they are back to the balanced sound that I prefer. Granted the current lineup is brand new but still guided by original member, keyboardist and chief songwriter Ton Scherpenzeel. So yes, it still sounds like Kayak with him there.

Lineup changes are nothing new to Kayak (I’ll let you research it for yourselves since there are too many to list) but “Seventeen” is instantly recognizable as being Kayak with the lead 3 minute prog pop of “Somebody.” And then the second track “La Peregrina” showcases the epic side of the band while still having plenty of melody. It’s less Broadway than some of their rock operas (which works for me just fine). And this balance continues with two shorter tracks next, including the logical first single “Feathers and Tar.”

There’s no doubt that Kayak will not be for everyone. Many times over the years I’ve even wondered why I like them so much. They are full of pomp and circumstance even in their shorter tracks. But I love bands like the aforementioned Supertramp and Queen which is who Kayak remind me of on songs like “Falling.” But before you get to sucked in by the sugary sweetness of songs like that, Kayak throw a 10 minute track at you with “Walk Through Fire.”

Scherpenzeel has certainly influenced many of today’s prog artists, including Neal Morse. In fact, Scherpenzeel recruited former Morse cohorts Kristoffer Gildenlöw (bass) & Collin Leijenaar (drums), though the latter does not play on the album. Still, there’s a rich musicality to everything that Scherpenzeel writes, whether its beautiful instrumental “Ripples on the Water” (with Camel’s Andy Latimer!) or classic Kayak sounding epic “Cracks” which is probably my favorite track on the album! “Seventeen” is pure Kayak from start to finish.

A lot of people who know prog probably aren’t that familiar with Kayak. The band has been huge in their native Netherlands for many years but failed to really make a big impact elsewhere. Unless you’ve done some exploring on your own like I tend to do, this might be the first exposure to a band that’s been around (on and off) since the early 70s. The good news is that “Seventeen” is not only an excellent prog pop album but a great example of what Kayak is and have always been.

I have been a fan of progressive metal and progressive rock for most of my life. My music collection is insanely large. My passion for life is music...progressive music!
View all posts by Rob →
This entry was posted in art rock, pop rock, progressive rock and tagged music review. Bookmark the permalink.