Galactic Cowboys – “Long Way Back to the Moon” 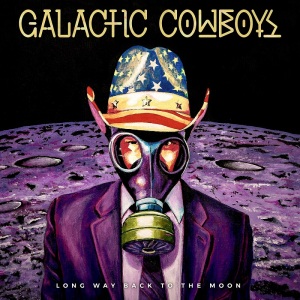 At the risk of sounding like a fanboy, I’ve been into Galactic Cowboys since their self titled debut album came out back in 1991. Since then, I’ve picked up each album (and the EP) immediately and the band never disappoint. Until 2000, when they broke up. By that point, the band were down to just original members Monty Colvin (bass,vocals) and Ben Huggins (lead vocals) along side guitarist Wally Farkas. Original guitarist Dane Sonnier left the band back in 1994.

The band had done some brief reunion gigs but finally after 17 years, the band officially reformed with the original lineup (including drummer Alan Doss) and have a new album, “Long Way Back to the Moon.” Once again, the band do not disappoint. I will say the album might not be as good as their first two albums but it certainly fits in nicely with the rest of their catalog.

Many of the things that make Galactic Cowboys who they are are still very much present on “Long Way Back to the Moon.” Meaty riffs, great harmonies and a wry sense of humor. I do wish that the band still utilized Huggins on acoustic guitar and harp (like on the first two albums), but that’s not the case here. But that’s just a minor issue since there’s no mistaking this band’s sound. No one else sounds like them but them!

The album starts with “Above the Clouds” which is actually a really old song. It was written by Doss and Colvin after their previous band The Awful Truth broke up in 1989. The song did not make the cut for the first album but it clearly has the sound of that album. It’s not the typical fast song opener that GC goes for on their albums and it actually took longer for me to really like the song. That’s not a bad thing either.

From there, the album has two very solid singles in “Internal Masquerade” and “Zombies.” Both have really great hooks with the latter having one of my favorite choruses that GC have ever done! “Next Joke” reflects that wry sense of humor in the lyrics. Huggins sings about lots of positive affirmations only to be undercut by the “Next Joke” refrain.

“Amisarewas” showcases the band’s knack for a great slow song: think Someone for Everyone but maybe not quite as awesome. “Drama” and “Agenda” are both mid tempo rockers that kinda remind me of each other, while “Hate Me” is more of the fast paced thrash track they are known for. I admit that’s never quite been the style that I prefer from them but they pull it off like usual.

While Huggins does sing lead, Colvin has always done his share of lead vocals through the years and does so on the epic title track which is my favorite song on the album. Both bonus tracks are great songs with “Believing the Hype” mocking the band’s own comeback. I like both tracks more than some of the ones that made the album!

The band are as refreshing as ever and not as rusty as one might think given that this lineup hasn’t written music together since 1993! I think this is the solid start that I expected from them and hopefully they will continue to make awesome albums in the future. The world was not ready for the band the first time around but “Long Way Back to the Moon” proves that the world needs the Galactic Cowboys.

3 Responses to Galactic Cowboys – “Long Way Back to the Moon”