Dream Theater at the Palace Theatre, Albany NY on November 14, 2017 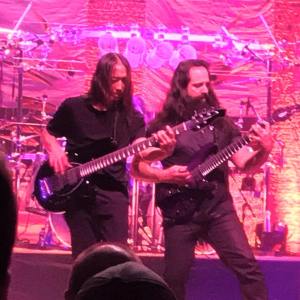 I saw Dream Theater for the first time back in 1993 on the Images and Words Tour at the Palace Theatre in Albany, NY. So it was very cool to see them yet again, but this time 25 years after that first time on the Images, Words and Beyond Tour. The first set was the “Beyond” set which had 2 songs that I could live with never hearing again in “The Dark Eternal Night” and “As I Am.” The latter contained a snip of Metallica’s “Enter Sandman” which just confirmed what I’ve always said about the song. It’s a re-write of that song.

But other than those two songs (and that they cut “Don’t Look Past Me” for the first time on the tour), the rest of the songs were excellent choices. It was nice that John Myung had a solo spot featuring his rendition of the Jaco Pastorius song “Portrait of Tracy.” In addition, it was nice to hear “To Live Forever” which was written during the Images and Words era. “Breaking All Illusions” was a great closer to the first set.

The second set contained all of “Images and Words” in order plus solos from John Petrucci on the outro of “Take the Time,” a drum solo from Mike Mangini in the middle of “Metropolis Part I” and an improv piece prior to “Wait for Sleep” by keyboard wizard Jordan Rudess. Musically the band were in top form. Singer James LaBrie told a lot of fun stories in between the songs and for the most part did a good job on the old stuff. But he didn’t try many of the insanely high notes and did strain a bit on others. But it was an excellent effort on 25 year old songs.

At one point, LaBrie asked what a certain button in front of his feet did and asked “Does this button make my voice go higher?” So it was nice that he has a sense of humor and also the crowd was clearly with him the whole way. While this is 3/5 of the band I saw way back in 1993, they still treated I&W with respect. Perhaps acknowledging the contributions of former members Mike Portnoy and Kevin Moore would have been nice, I can completely understand why they didn’t. Especially Portnoy who has been a constant distraction since he left six years ago.

The band returned to do the 23 minute “A Change of Seasons” as the encore, since it also was written for “Images and Words.” I kinda wanted them to revert back to the old arrangement of the song but again, I understood that most people are used to the official 1995 released version. It sounded great and made the perfect finish to a fun night of nostalgia. I am definitely older but so is Dream Theater and it felt like we are aging together. That’s a comforting feeling.

Setlist:
Set 1:
The Dark Eternal Night
The Bigger Picture
Hell’s Kitchen
To Live Forever
Portrait of Tracy (Jaco Pastorius cover by John Myung)
As I Am (With Enter Sandman)
Breaking All Illusions

Encore
A Change of Seasons

1 Response to Dream Theater at the Palace Theatre, Albany NY on November 14, 2017