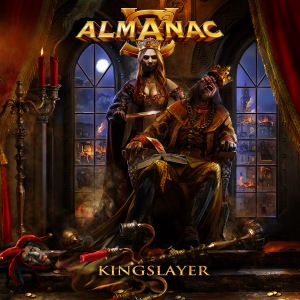 Just over a year after their debut album “Tsar”, Almanac is back with their second outing, “Kingslayer.” Almanac is the project of guitarist Victor Smolski, formerly of Rage. The band have not one but THREE vocalists. That is part of my issue because they really don’t need all three.

Jeannette Marchewka is relegated to harmony vocals and the occasional line here and there. Andy B. Franck has the better voice but tends to yield to lead lead vocalist David Readman, who has a bit of a gravely voice but sounds a tad affected. The music on “Kingslayer” is really great through out. My issue tends to be how the vocals are done. There are way too many shouted/chanted vocals which seem geared to a stadium crowd. It winds up sounding cheesy.

“Hail to the King” is a perfect example of this. The title of the song is basically the lone part of the song I don’t like because it is chanted. It ruins things for me. “Regicide” almost falls prey to the same thing but for whatever reason, it doesn’t sound quite as bad as that. “Children Of The Sacred Path” works fairly well vocally though as does the brief title track.

Stylewise, Almanac remind me of Ayreon or even latter day Savatage, right before they fell into being TSO. It’s a solid mix of power metal, symphonic metal and prog metal. And the band move easily between these genres to make their own sound. It’s never a case of trying to be everything at once. The music fits the song and the style is a part of that.

I am probably never going to be a huge fan of Almanac but they are really good and I think many people will appreciate “Kingslayer.” And even “Tsar” for that matter. It’s finely crafted, epic metal that will please those that love a bit of Game of Thrones in their metal diet.

I have been a fan of progressive metal and progressive rock for most of my life. My music collection is insanely large. My passion for life is music...progressive music!
View all posts by Rob →
This entry was posted in cinematic metal, power metal, progressive metal, symphonic metal and tagged music review. Bookmark the permalink.