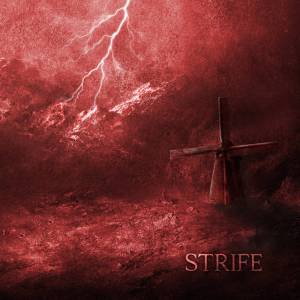 I reviewed the last Loch Vostok album “From These Waters” back when I wrote for PowerofMetal.dk in 2015. It actually seems like a lot longer than that for some reason. I wasn’t as impressed with that album as I was hoping I would be. Now it’s time to give Loch Vostok another shot with their new album, “Strife.” I actually had to re-read my own review of the last album to see what the issues were.

While there’s no mistaking that “Strife” continues the heaviness of it’s predecessor, the one difference I hear is definitely a more progressive/avant garde vibe to the music. It’s less straight up melodeath and more complex while never wandering into noodling. Teddy Möller still has a top notch harsh vocal but the upside is that his clean vocal sounds better. I think it’s actually the mix that helps. The mix by David Castillo is fucking amazing as is the mastering by the great Jens Bogren (of course). So Möller sounds more a part of the music versus being left out too much in the open.

The songs are all really well written and the band sounds very tight. Loch Vostok know how to write a good riff and mix it with enough chaos to make it interesting. “Babylonian Groove,” which starts the album, is a good example of this balancing act. One issue I had on the last album was that the choruses weren’t strong enough but that seems to have been remedied.

“Summer” is a manic attack which is augmented nicely by the keys but it still has a solid chorus. The main riff on “The Apologists Are the Enablers” is one of the band’s very best and the chorus is awesome, making it a favorite of mine. And the riffs are quite strong on “Strife,” from the off-kilter riff on “Cadence” to the full throttle of “Yurei” to the hook on “Ventilate,” it’s all here. The problems are that some of the songs feel quite similar to each other as you get deeper into the album. Also, the lyrics aren’t the most interesting at times. “Consumer” bemoans the addiction to shopping which won’t have you jumping out of your chair.

All in all, “Strife” is an improvement over their last outing. I wouldn’t call it Loch Vostok’s masterpiece but if you enjoy heavy riffs and quirkiness in your prog, it’s certainly worth checking out. “Strife” is modern prog metal in the purest sense of the genre: heavy hitting and making no apologies.