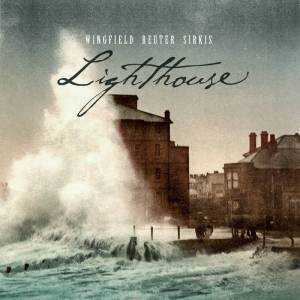 Somewhere between the frightening world of improvisation and the comforting sea of structured prog stands the “Lighthouse.” This thrilling hour of music was generated by the trio of guitarist Mark Wingfield, drummer Asaf Sirkis and touch guitar genius Markus Reuter. The album at times feels planned and yet veers directly into something clearly spontaneous. “Magnetic” is one track that definitely crosses the line, back and forth.

It would be an easy fit for those of you that love the true spirit of King Crimson. After all, Reuter was/is a part of the Crimson Projekct. He most certainly should be in Crimson in my opinion. He adds the atmosphere to every track. Sirkus channels the fluidity of Bill Bruford, driving songs like the opener “Zinc” along. And then moves to a more “collaborative” approach that Pat Mastelotto tends to use. The epic “Ghost Light” shows that side of Sirkis’ playing.

Wingfield does some serious “shape throwing” throughout the album. It’s not about the number of notes or the comfort of those notes. He is feeling the notes and firing them at you. It’s somewhere between Holdsworth and McLaughlin. But this is more malevolent than jazz. Check out “Derecho” for an example of this strain of prog jazz.

Obviously this won’t be for everyone but it’s really the definition of what being progressive is. Even the trio of shorter tracks are constantly moving and changing. “A Hand in the Dark” is unsettling, “Transverse Wave” has me tilting my head to the side and “Surge” has a drive to it (appropriately named track). For as “peaceful” as “Lighthouse” can be, at the same time it’s also unnerving too. You see where the wave is coming from but you aren’t prepared for the force behind it.

I have been a fan of progressive metal and progressive rock for most of my life. My music collection is insanely large. My passion for life is music...progressive music!
View all posts by Rob →
This entry was posted in avant garde, experimental rock, jazz, progressive rock and tagged music review. Bookmark the permalink.