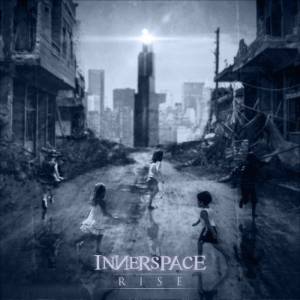 Canadian Progressive rockers Innerspace have released their sophomore recording “RISE” and it’s a grower. If you are reading this website, you probably know what a “grower” is. In case you are unaware, it’s a recording that at first is somewhat average-sounding without huge initial impact, but after repeated listens, it opens and expands like the bud of a flower or reveals multiple layers like peeling an onion.

Originally I tried to “shuffle” my way through “RISE” and, while I found a few high points, I decided to go with the “start-to-finish” approach; I should have known as there is a suite of five songs closing out the CD. The five-piece prog rock/metal default is here with lead and rhythm guitars (Simon Arsenault and Phil Burton respectively), keyboards (Marc-Andre Brunelle), bass (Thierre Clouette) and drums (William Regnier) with Burton taking the vocal mic as well.

If you have the opportunity to listen to music uninterruptedly, then take this journey. I’ll reject a play-by-play review and instead mention the merits of this obvious concept album. There is a choral melody repeated throughout the CD which (Tracks 1,2, 8, 10) that sounds like Latin which casts an aura of serious, emotional weight. There are many fantastic transitions between songs using cinematic and/or atmospheric sound effects. Some chord progressions are revisited which threads the songs together in a very clever way. There are a few slower, minor key songs that carry-on the emotional weight of the concept (tracks 3 and 4) and there are a few heavier, prog rock moments (tracks 5, 9), there are tracks which serve as transitions but are integral due to their atmosphere, flow, and instrumentation reminding me of Pink Floyd. Two tracks are +10 minutes which feature orchestral and choral arrangements.

Burton’s voice may lack a huge range but his earnest delivery is convincing and not flashy, helping me focus on the melody and emotions within the music. Arsenault must be a David Gilmour advocate but can shred in a tasteful way when necessary. As Prog Man Rob finds important, the instruments don’t try to become more important than the songs. I would assume Brunelle has a large role in shaping the atmospherics and kudos to whomever is responsible for the choral and orchestral arrangements. The production is first-rate and allows one to sink into the music rather than focus on any unpleasant minutia.

If you asked me to compare “RISE” to other bands I’d say Marillion, Pink Floyd, APSOG-era Fates Warning, and The Flower Kings. I give Innerspace extra credit for the fact that after listening a few times I’m drawn to read the lyrics and dive into the concept. Hopefully the social media world shares this review so fans of thoughtful, nuanced progressive rock are able to enjoy “RISE” like I did.

Leave a Reply to The Grim Reader Cancel reply