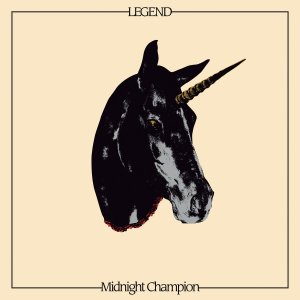 This album is a bit of a surprise for me. I’d never heard of Legend and unless the promo hadn’t found it’s way to my inbox, that would have remained the case. Even then, there are things about it which normally aren’t things I like about music, yet on their album “Midnight Champion” it all seems to work. A good chunk of the album is reliant on synths. And while I do like keyboards, there’s a danger of something sounding too synthetic.

The success of the keys is because Dori Bjornsson is good at choosing what type of keyboard to use and when the band should kick in to support the more “programmed” moments. Bjornsson has been on the last 2 Solstafir albums which went a long way toward convincing me to listen to this album. The album gets off to a great start with both “Cryptid” and “Frostbite.” Each have excellent melodies and powerful dynamics.

“Time to Suffer” has grown on me. It reminds me a bit of Nine Inch Nails only slightly more organic sounding. Two tracks that make this album a MUST own are “Adrift” and the title track. “Adrift” has an INCREDIBLE vocal and amazing chorus, while the title track is one of the best songs that I’ve heard in 2017. It’s truly epic in its approach. From the first time I heard it, I knew I loved it AND I say “wow” each time it comes on.

“Scars” is a bit more akin to “Time to Suffer,” but maybe more industrial. The downside is the over use of programming on the album. The one reason that I can take it on this album is that it never tries to sound like real drums. They are meant to sound like electronics. “Gravestone” is a good example of how it doesn’t always work. It’s a good song but the song never loses the programmed drums which is a big let down.

“Midnight Champion” is has some major highs but isn’t without its flaws too. Still, it’s a VERY listenable album and thus quite enjoyable as well. Legend might not be legends but they know what they are good at. It’s all on full display on this album!

I have been a fan of progressive metal and progressive rock for most of my life. My music collection is insanely large. My passion for life is music...progressive music!
View all posts by Rob →
This entry was posted in ambient, atmospheric metal, experimental rock, modern prog and tagged music review. Bookmark the permalink.