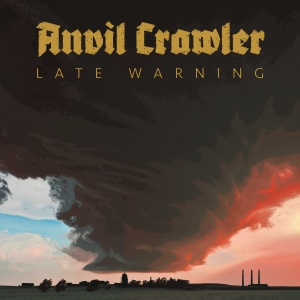 Anvil Crawler are an all instrumental band from Lansing, Michigan. On their EP “Late Warning,” they do have chops but their style is like Protest the Hero than say Animals as Leaders. The riffs fly around at top speed. The problem for me is that the songs segue together and sometimes the riffs start to blend a bit. So when you go from “Monolith in the Sky” to “The Ballad of Bill Paxton,” it’s really hard to tell that things have changed. The one exception might be the title track, which kinda reminds me of Clutch!

It’s fine to be consistent and Anvil Crawler are quite consistent in their music. But without lyrics, the songs need the riffs to differ to establish their own identities. Make no mistake, “Late Warning” does ROCK from start to finish. Anvil Crawler have energy to spare and the songs sound live in the studio, there are really few overdubs that I can hear, just the guitar solos. One guitar in each speaker, bass guitar and drums. The band strip things down to the basics for sure.

As EPs go, “Last Warning” can best be described as “solid.” Anvil Crawler don’t reinvent music but they are really good at what they do, which is rock. Just how progressive all of this is is probably up for debate. I think there are plenty of people out there who don’t want to overthink things and Anvil Crawler is for them.