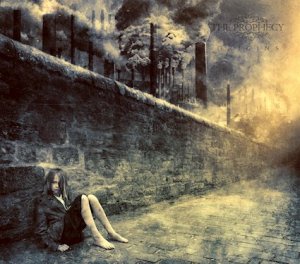 It’s been a while since the last album by The Prophecy. “Salvation” was one of my favorite albums of 2013. It was the perfect combination of prog and doom. The Prophecy don’t play doom in the sense of darkness and bleakness. Their approach, while being slow and deliberate, is more akin to a sunny day than a moonless night. They are more like a prog rock band playing doom metal. It makes for a compelling combination.

At long last, the band are releasing new music in the form of “Origins” which is a five part album that finds The Prophecy mining all of those elements that make them unique and a favorite of mine. The first track has plenty of piano and a great clean vocal by Matt Lawson. It’s one track that is mostly a clean vocal. Lawson also possesses one hell of a death growl too and there’s a nice short moment in which he features it.

Much of the album features Lawson “harmonizing” the clean and the death vocals together which is very cool. He starts off “Origins II” with that combination. The music is more mellow than “Salvation” which is fascinating when used as a backdrop for his vocals. The melodies are quite strong so it works. There’s a wordless female vocal on the track which is different but really sounds out of place to me. “Origins III” has a thicker, heavier chorus coupled with mellow verses. It works well because the chorus stands out because of it.

“Origins IV” has more of a groove to it which for The Prophecy is unusual. They tend to have one gear which is slow! But this one almost bounces along which makes it my favorite track on the album. Great bass work on the track from Gavin Parkinson! The band are great at memorable choruses too which was one reason that I loved the last two albums. This is another song with a great, memorable chorus. “You take the life from me.”

The album finishes with my second favorite track “Origins V” which has a LOT of atmosphere. Another song with a kick ass chorus and great vocal by Dawson (clean and harsh). Also, wait for the ghost track too! If I had to compare the Prophecy other bands, I think the closest would Pallbearer and perhaps Novembers Doom and even While Heaven Wept. But The Prophecy really combine prog with doom better than all of these. “Origins” is a welcome return from The Prophecy and if you like progressive doom or doomy prog, you need this album in your ears.