Interview with Pete Morten of My Soliloquy 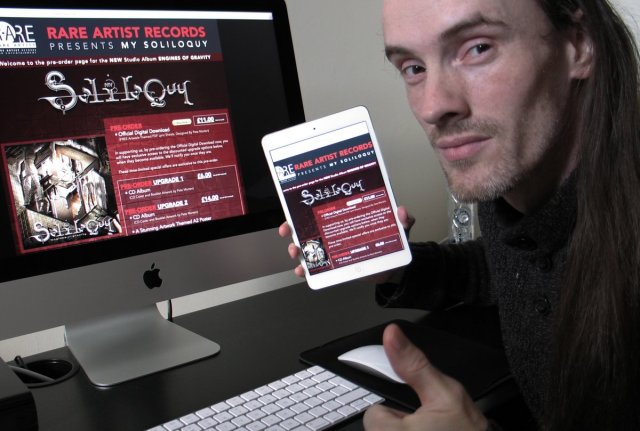 Pete, a few big changes have happened since we last spoke here. The first being that you have left Threshold after being in the band for 10 years. Was it hard to leave?

Yea, it was very hard, but I was sensing a slow change of heart over the last year or so, if I’m honest with myself. I agonised over it for a good six months before announcing it to the guys. Every day, it would be on my mind, but, due to various reasons, I just didn’t feel like I belonged there any more. My feelings were confirmed during the writing sessions for the ‘Legend Of The Shires’. I wrote and fully demo’d a complete 8 minute song, but it was rejected. I reasoned, take my bow now, before committing anymore to a new record and tour.

Make no mistake, I feel very blessed to have been in Threshold for the last 10 years
and quite apart from being very proud of the songs I’ve written for them, I’ve had some great times touring, to say nothing of all that I’ve learnt, playing with those guys.

Was it a case of wanting to devote more time to your own music then?

In short, yes. To answer more fully, I would have to say that I feel very self assured and confident in my own writing style and ability. Having pressed 1 E.P. and 2 My Soliloquy albums now, where I am the sole author of all the songs, there is no doubt in my mind, that what I’m writing is a perfect expression of who I am. While that statement is an obvious one to make, allow me to elaborate. I think to allow anything, or anyone to influence, control or compromise my writing, at this stage in my career, would in fact, be a step backward.

Speaking of your own music, the other change for you has been that your band My Soliloquy left one label, joined another label, only to leave that one to start your own label. That had to be a bit frustrating at the time all of that started happening.

“Frustrating” is an understatement ha ha. I made the assertion that I was absolutely done with not getting paid the writing royalties I am due. You see, our publishers went bust. I also made another assertion, that I was also done with dealing with publishers and indeed record labels, too, for that matter.

Unless you’ve been a musician, trying to track down late/missing/stolen royalties (check as appropriate) you simply cannot begin to fathom how entirely exhausting, nauseating and stressful it all is. I’d had enough.

My view is simply this: everything is learnable. So I resolved to set up my own label, under which I could put out my own albums. I’ve learnt a lot already, and I’m learning everyday. I’m not alone in this thinking. Marillion set one such precedent and have made a success of taking control of their own destiny, I am simply choosing to do the same. As far as I can tell, a huge portion of the industry is still operating under the old paradigm of how the business used to be, before the internet happened. A lot of those rules simply don’t apply anymore. A new way of thinking is required.

How does it feel to be your own man and release your music yourself?

The new album is called “Engines of Gravity” and I’ve been lucky enough to have heard and reviewed it. How would you say it compares with the first album?

The predictable thing to say, would be, its more mature, but while that’s as maybe, I feel there’s no really comparing the two. I say that, cus they are both perfect records, for the time that they were written, so one is no better or worse than the other. Any way you slice it, both albums are incontrovertibly ME.

That said, I would say that ‘Engines’ has some of my favourite songs, I’ve ever written, on it. Personally speaking, Darkness Is Gathering, for me, is a perfect expression of the hopelessness, I’ve sometimes felt, when I’ve been at my lowest ebb. Of feeling the black closing in all about me, and feeling powerless to stop it. Yet, conversely, the pathos laden chorus, simply stating “we are all the same” is where the hope, the salvation comes in. Ultimately, making it a compassionate piece. We are all the same, because, in our ability to be wounded, we are all rendered equal.

What themes are you hitting on lyrically this time around?

The whole premise of this album is centred around the idea – to paraphrase the beautiful words of 19th century spiritual philosopher, James Allen – “what you think, so you become”. His wonderful little book ‘As A Man Thinketh’ is a profound source of wisdom and insight. So I wanted to loosely use that philosophy, under whose umbrella, I’d centre the themes. This is not a concept album though, and in point of fact, the artwork is more of an expression of that philosophy, than the lyrics are.

So lyrically, as always, it’s deeply personal – I simply cannot write about what I don’t know – and it has a deep spiritual thread too. But all my work does, so no great surprise there. Getting back to that philosophy though. It ties in, because no matter what challenges or adversities presents themselves in our lives – and the album is littered with many such events – we are always placed at the point of choice. We can choose how to feel, how to think, and how to react. Thus, your own outlook, concerning an adverse condition, can either be a curse or a blessing.

You get to decide that outcome, always, no exceptions. So if you choose to be bitter and resentful, as a result of your thinking about something, so you become.
Indeed, the more you hold yourself in vibrational alignment with bitterness and resentment, the more you attract into your life experience, circumstances that will breed yet more bitterness and resentment. The law of attraction states that it is so. The Progenitor, for example, from the new record, touches on this, but from a more spiritual vantage point.

A small crystal ball moment for you here… I’ve already started drafting out and writing for the next two albums. One of which, will be a concept-type record, entirely centred around this and many more wonderful spiritual wisdoms.

Another thing that people should know, if they don’t, is that you are a graphic artist and once again you did the artwork for the album. I have to say it is one of the best album covers that I’ve ever seen. It really stands on its own as a piece of art. What were your inspirations for this beautiful piece? The room one the album cover represents the Self; the character. The stone figures surrounding the room represent the aspects of personality exerting influence on the Self. They are made of stone to represent the often unchangeable core of personality, and the internal struggle, often met when we try to effect a change. The isometric mosaic represents thought becoming reality through action as it manifests from 2D to 3D via the gravity of thought. So we see the room – as character, from two perspectives “as above, so below” but also as a reflection of itself, being formed through ones deeds. The figure sitting on the right, is constructing a mosaic, that is the very image of the album cover, illustrating, we are what we think, and so create our own realities thus.

I know you have started pre-orders for “Engines of Gravity” so give the people the places they can order it and when the release date is.

Thanks Rob, well you can only preorder it from us here; www.mysolilquy.co.uk
Release date, worldwide is: 14th September.

A thing to note. The preorder prices are special offers, we won’t be offering those bundle prices, post September 14th.

Now that you are near the finish line FINALLY with this album, what are you up do next? Any chance of touring with the band? Other projects?

Obviously, I’d love to tour the record, but touring is expensive business. The numbers need to make sense, so we don’t lose money hand over fist, and we need to be paid. That’s asking a lot for a small band like us. But, this won’t always be the case, and I’m working hard at getting us the right kind of exposure. After all, I have to, I AM the record label and publisher now.

The only other band, I’m working with now – despite offers still coming in to guest on other people’s albums – is Nightmare World. Besides two shows coming up in London, in the next two months, we’re busy writing for the 2nd album. I’ve already begun writing lyrics and demoing vocal lines/harmonies etc etc. I can’t possibly predict when we’ll have it finished, but the fact we’re working on it at all, is good enough for me.

Thank you Rob for this lovely wee chat, and thank you so very much, for your continued support.

1 Response to Interview with Pete Morten of My Soliloquy