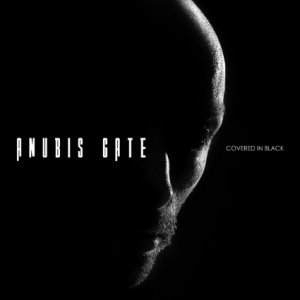 “Covered in Black” is a truly progressive album. Anubis Gate could have played it safe and not pushed their sound. Their last two albums are both amazing and while I prefer them to their older catalog, they built upon the foundation of those albums. I just prefer the vocals of bassist Henrik Fevre. For me, that’s been the difference between the older material and the more recent.

Back to the new creation. What makes “Covered in Black” so compelling to me is that it’s like a jigsaw puzzle. Some of the songs work fine on their own while they work even better with the other songs around them. Other songs work best with the songs around them. Besides that, the songs are darker (as the title of the album would suggest) plus they are bigger sounding and more complex. This is not an album that you will “get” after one listen. However, with each listen it makes more and more sense and as it does, you fully appreciate the level of detail in each part of each track.

The opening track “Psychotopia” is a perfect example. Yes it has those great Anubis Gate melodies but it has some different harmonies, an orchestrated section and proves to be a challenge to fully appreciate the first time. It then segues into “The New Dehli Assassination” which works better as a part of the songs on each side of it. It has a cool Eastern vibe with sitar and percussion. Initially, I assumed it would be the usual verse/chorus/verse track but it’s not that exactly because you don’t quite settle in. It’s a bridge to the next song but it makes the songs on each side of it better because it’s there.

This is part of why many people might find the first single “The Combat” harder to digest. I think it was the wrong track to release as a “single” not because it’s a bad song. Not at all! But it’s a song that fits better within the context of the album. “The New Dehli Assassination” leads right to it and “The Combat” has some very different melodies that aren’t typical for Anubis Gate. This for me is a good thing.

The next track “Too Much Time” has an intro that reminds me a little of the Alan Parsons Project. It has a very cool vibe to it which I love. It gets heavy and when it does things get interesting. The song is a testament to Fevre’s voice. These are challenging melodies and never “obvious” if you know what I mean. The solo section harkens back to the Middle Eastern melody of the previous tracks. While this album isn’t a pure concept album, you can hear and feel the connection of themes throughout it.

The three part suite: “Black,” “Blacker,” and “Blackest.” This is the main part of the jigsaw puzzle. “Black” would have been the song I would have released as a single. It works on its own BUT it works just as well as the first part of this suite. “Black” is very catchy and memorable. “Blacker” continues the melodies of “Black” but also is stranger and yes darker. “Blackest” finishes the suite and while it’s the shortest piece, it makes a great finale for the suite.

The suite is definitely a favorite of mine on “Covered in Black” but “Operation Cairo” is my other favorite. This song is not only epic in length at over 9 minutes but it’s even more epic in sound and scope. Remember those Eastern melodies? Well this takes all of that to a new height. Feel like you are there in a dessert or something. The chorus is very memorable too. This is one of the best tracks that Anubis Gate has ever done.

Taking this further, “Covered in Black” is the best album that Anubis Gate has done to date. They took risks with the overall vibe of the album and the melodies and arrangements of the songs. It paid off! This is an album that needs to be listened to in its entirety and not just once but many times. When you “get” the album, you realize just how amazing it is. This is how to be progressive.