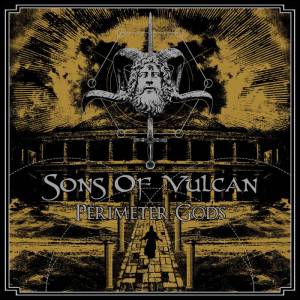 It’s a bold move for a young band to record an album that is effectively one really long song, but that’s exactly what St. Louis based band Sons of Vulcan have done with their second album “Perimeter Gods.” The confusing part is that rather than have one song called “Perimeter Gods,” the song on the album is called “Daedalus.” The track is a massive 52 plus minutes long and has 9 sections to it.

Style wise, Sons of Vulcan play a hybrid of prog and post rock which they really fuse together rather seamlessly. As a whole, the song DOES flow well for me. Although it does take a lot to get through it. Anytime, you have one long ass instrumental song, it does put more pressure on the band to keep the interest going. The good news is that this is a trio that can really play BUT never make the song into a ridiculous solo session.

The riffs are all meaty, the solos are melodic and they fit the riffs. I also like that Sons of Vulcan never overstay their welcome on any given riff. The song is always moving forward. “Daedalus” is like a river that keeps flowing. Or maybe it’s a journey that the band are determined to take you on and not lose you. They never run way ahead of you. There are times where you might wonder if you’ve reached the destination yet but they never give up.

There are times on the track that I could have used some vintage keys for some added texture but that’s just personal preference on my part. If you want an outstanding 52 minutes of quality riffing, “Perimeter Gods” (or “Daedalus”) is something you need to check out. This is not for someone with a short attention span!