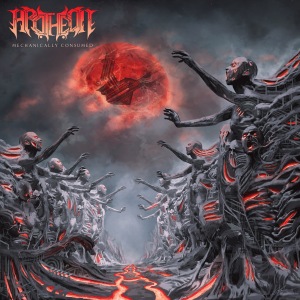 Apotheon are a tech death metal band that actually would do themselves a huge favor by embracing their prog metal side a lot more. There are times on their EP “Mechanically Consumed” that they remind me of fellow Coloradans Allegeaon and other times they sound a fair amount like Between the Buried and Me. The problem is they seem to REALLY prefer the former to the latter but they might be better at the latter. Follow me? Maybe not.

The EP starts off with the short instrumental “Premonition” which really should be a LOT longer. I really wish the band had developed this piece into a full track rather than relegating it to an introduction to the EP. It’s powerful, heavy and has melody. The other three tracks don’t really stand apart from each other which is the issue I have. To be clear, Apotheon can fucking PLAY. But how many arpeggios do you need to be attacked with really?

The band take a left turn here and there, once on each track and those are the highlights for me. They don’t mimic BTBAM but it reminds me of that band. That takes talent but they don’t quite embrace it fully on the EP. The other issue is that vocalist Reece Deeter sounds limited with his death vocals. Plus he has no real clean vocal so when the band go on a detour, he is either left out or sounds really out of place. At times, his death wheeze is more deathcore than death metal.

I don’t wanna piss on Deeter’s head too much. Let’s all remember how shitty Tommy Rogers used to sound! But it’s not his fault either. The band really white knuckle the tech death label so hard they seem determined to fit their vocalist’s style. Admirable but let’s hope the whole band grows together. As it stands, “Mechanically Consumed” is a nice beginning for a band capable of a lot more.