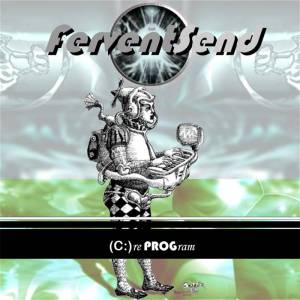 Jon DuBose is the mastermind behind the prog collective known as Fervent Send. Jon is also a very good friend of mine. Now before you say, “no way can Rob be honest when reviewing his friends’ music,” let me point out a few examples. I didn’t exactly give a glowing review to Imminent Sonic Destruction’s last album. Tony is a good friend but I was very honest. I am guessing their keyboardist won’t be sending me a birthday card.

While I loved “Mantiis” by Obsidian Kingdom (who I am friends with), I really disliked their last album “A Year With No Summer.” In fact, I haven’t really heard from the band since then. So while it might be easier for me to just shit out a fake positive review, it’s just not how I am wired. So when Jon asked me to check out “(C:)rePROGram,” I was hoping for the best.

The first thing you need to know is that Jon is fearless when it comes to his music. There isn’t anything he won’t consider or attempt. Also, he really makes sure he has the right people to carry out whatever insane mission he is looking to embark on. Those factors alone make his music worth listening to. The upside is that most times these experiments work out. I said “most.”

The album opens with the rumbling “Think Minds Alike” which, like other tracks on “(C:)rePROGram,” owes a bit to krautrock. It’s a very cool song and the arrangement and instrument selection fit it well. Also, it doesn’t overstay its welcome. The strange flutes at the end make sure you know it’s Fervent Send. “Ancient Ghost Tribe” is a pulsating number with Jon riding the bass line along side percussionist Lobsang Kedrub, who seems to be a Jamie Muir fan. Nothing wrong with that. It’s another prime example of modern krautrock.”

“Gargoyle in the Grotto” gives guitarist Kevin Webb a chance to showcase some dissonant chords and shape shifting notes. It’s about as direct as Fervent Send can get. “Yaaht Hitar” has some shouted vocals from Jon and my advice to him is to never do that again. It’s as if he knew I’d hear this album and wanted to make sure I was paying attention. He knows damn well I’d hate that. Luckily, it’s the shortest song and I won’t take off too much for it.

The album closer is the 12 plus minute “Whale Bone Eyes” which features another friend of mine Jason Rubenstein on mellotron. Claudio Simone’s flute is very much a key to the success of this track and it’s as close to “traditional” prog as Fervent Send get. It feels like 70s Crimson running into 2000s Crimson in a bar and jamming it out. This one is definitely my favorite track of the album.

The think that always gets me is the vision that it takes to create something like “(C:)rePROGram” because this more akin to art than your average piece of music. So overall yes I do really like this one with a minor exception. Who the hell knows what’s next from Jon or Fervent Send? My guess is that he has no idea. If you like a good and fun challenge, check out this album and don’t pay a dime on Bandcamp. That’s the way Jon wants it.