Interview with Jonah Weingarten of Pyramaze

Congrats, Jonah on the new album “Contigent,” I like it a lot. What’s been the reception?

Thank you so much! The reception has been great honestly, fantastic reviews across the board. I receive loads of messages every day from fans who are liking this current incarnation of Pyramaze, even though it is a little different sounding than our first three albums.

It must be nice to be able to come back relatively quickly with a followup to Disciples of the Sun. Even with the busy schedules of many of you. How did you manage to accomplish that?

I would attribute our quick turnaround for the album to Jacob mainly. The fact that he has 24 hour access to his own studio really helps a lot, and of course he is a fantastic producer. Actually we are talking about working on a new album this summer already! 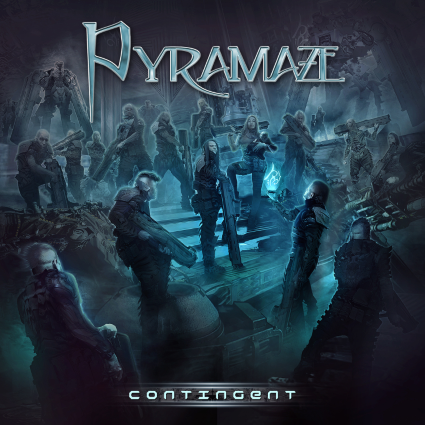 Do you feel the current lineup has gelled even more since the last album and how did that familiarity play out on “Contingent”?

Absolutely, and I think its evident in the quality of Contingent. We really bonded a lot when we played Prog Power USA last year and I think that gave us some serious momentum as a unit. We all know what to expect from each other an at the same time we each continue to grow and mature as musicians. I fully expect our next album (#6) to be even more of a progression and to be more epic!

The album is very hooky with many of the songs being almost instantly singable. “Heir Apparent” is one of those tracks for me. Was there more of a conscience effort on melody?

We do make a conscience effort try to make our choruses huge and memorable which has been a trademark of Pyramaze since the beginning. I think every song on the record has a hook really, both vocally and musically. For me “Star Men” and “Nemesis” have some of the biggest choruses on the record.

What are your favorite songs on the new album and why?

“Star Men” for sure will go down as one of the greatest Pyramaze songs of all time, but also “Kingdom of Solace” and “A World Divided” which were both singles. I think these songs really just encapsulate the essence of what Pyramaze is today with this current lineup. “Tides That Wont change” which is the grand piano ballad on the record, was really a labor of love for me so it is close to my heart.

What are your touring plans?

Well this year we are playing Prog Power Europe in the Netherlands, and are currently working to set up a few more shows around that date, possibly in Germany and Denmark. We don’t get to play nearly as often as we would like for various reasons, so when we do it is something special for sure!

I know you have some other projects. Tell me about them!

The biggest thing I’m working on right now is my new project with Matt Barlow called Sentinels. Its just me and him as a duo, and it is basically epic film score music with Matt singing on it. I like to think we are inventing a new genre of music and Im very excited for people to finally get to hear what we have cooking. Also Jacob Hansen (Pyramaze) will be mixing the record. In addition to that I just finished working on some orchestration and piano stuff for the debut album of CyHra for my friends Jake E. (Ex-Amaranthe) and Jesper Stromblad (Ex-In Flames) on Universal/Spinefarm.