Posted on April 6, 2017 by thenihilistchamber 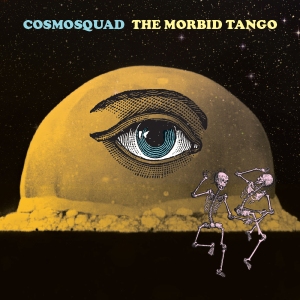 I was reared on the instrumental guitar album, and it is this style that in many ways informed my initial dive into progressive rock and metal. As a musician, an active listener, and an analyst (for better or worse), there can be a certain inherent satisfaction in being bombarded by notes and technique. It is often enjoyable and eye opening listening to talented musicians pushing themselves to the limits of their ability, and one doesn’t have to venture much further than the progressive genre to find ample examples of musicians doing just that.

With that being said, these stylistic archetypes are easy to fumble, especially within the realm of instrumental music. The risk of boring the listener with bland technical displays and lackluster songwriting always exists on the periphery for bands that choose to do it strictly instrumental, and the balance between songwriting, technique, experimentation, and melody is ever illusive for many extremely talented bands. Cosmosquad’s “The Morbid Tango” deftly avoids these pitfalls and provides a refreshingly diverse instrumental record that is as varied as it is well executed and passionately performed.

To call “The Morbid Tango” a guitar album is unfair, because although the guitar drives the songs melodically, weaving in and out of extended lead sections, the other instrumentalists more than achieve the same high standard set by (demanded by) the guitar and the overarching compositions as a whole. The bass has ample time to shine with some absolutely killer syncopated lines and the drum parts always groove with a flair that seems to accent exactly what they need to, with style to spare. The band really sounds like a unit that is communicative and locked in to creating a shared space for these songs to unfold, and although chops abound, it rarely ever feels overwrought or forced, instead making sense within the context of the piece. I can say from experience that this is a difficult balance to achieve, which makes how well this band do it really stand out that much more.

I can also appreciate just how diverse the record is sonically. Opener “Morbid Tango” is just that: a metallic onslaught that also happens to groove hard while coaxing the listener to bang their heads. A great track that had my interest right off the bat. Elsewhere on the record the band explore metal, prog, jazz fusion, funk, hard rock, blues, and even some country inspired guitar licks, and the ever tasty playing had me grinning at every turn. The riffs, chord progressions, and jams really work, and in my opinion hold together really well. “The Ballad of Rick James” is an especially fun ride that reminded me of some of my favorite and most creative Shrapnel-era players, namely the fusion-inspired Greg Howe, Richie Kotzen, and Michael Lee Firkins LPs. Closer “Beyond Death’s Door” benefits from a truly spectacular build and great, emotive guitar melody that really pays off and ends the record on a high note.

Overall, the record stands as a great example of how to do chops-centric instrumental music the right way. Nothing here feels forced, and is not only bursting with solid ideas and experimentation as to maintain the interest of the listener, but also genuinely rocks and sounds like a band that is having a lot of fun playing together. As long as the listener isn’t opposed to strictly instrumental music and can appreciate a great guitar solo (or 30), there is sure to be something for the avid prog and fusion fan to love on “The Morbid Tango”. An easy album to recommend.