Mark Papagno – “The Man Whom the Trees Loved” 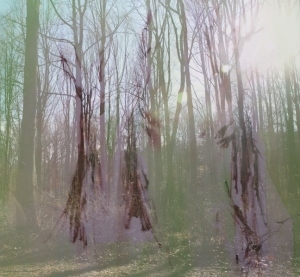 The latest trend seems to be getting well known musicians to play on your album. I do understand it from both ends. Newer musicians see the opportunity to get big names to be associated with their work and the “hired guns” can make a living. American guitarist Mark Papagno has three well known musicians on his album “The Man Whom the Trees Loved”: Adam Holzman of the Steven Wilson band on keyboards and bassist Bryan Beller and drummer Marco Minnemann of the Aristocrats.

This is really a double edged sword. It does get ones attention and want to here the music but it also sets the bar EXTREMELY high based on the talent level enlisted. While I do think that Holzman gets a chance to shine now and then and Minnemann gives everything he does 110%, the problem is the music itself isn’t as compelling as it needs to be. Bellar sits back a bit to let things happen while the artist behind the work, Papagno doesn’t take charge as much as I thought he would.

There are times that it’s about chord progressions and not riffs. This is an all instrumental album with some serious virtuosos, so yes I expect and even demand to be blown away. At times, there are some flourishes like on “Ritual” (my favorite track) and to a lesser extent on “Darkness Falls” but many times it’s just a basic chord progression that goes too long before anything compelling happens. The lead track “The Listener” is a good example of that.

On that track, it feels like something is missing, like even a vocal. It takes too long to develop into a part that grabs your attention. There are a few shorter pieces that Papagno wrote with Holzman, duets if you will, and each are pleasant interludes. But again, having to fill the shoes of Steven Wilson or Guthrie Govan is a huge risk and unfortunately one that doesn’t pay off for me.

To be clear, this is NOT a bad album at all. I’d go as far to say that it’s a pretty good album and like I said Minnemann gives it everything he has. But it’s not an album that has gotten beyond background music for me. If I had to cite reference points, I might go with the bands these guys are members of and even Rush to a degree. That’s fine but, my criteria for instrumental music means RIFFS and moments that grab you by the collar and shake you. Sadly, there are very few of those moments. Kudos to Mark Papagno for having the balls to stand toe to toe with these musicians regardless of the out come.

1. The Listener
2. Where Memory Sleeps
3. Darkness Falls
4. When the Rain Begins
5. Ritual
6. Because of Sleep and Because of the Cats
7. The Man Whom the Trees Loved